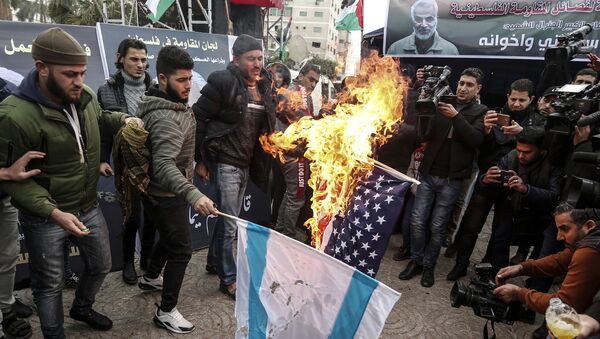 Earlier on Saturday, Iranian Revolutionary Guard Corps Commander, Gholamali Abuhamzeh, reportedly said that 35 vital US targets in the Middle East, as well as Tel Aviv, are "within Iran's reach."

The US State Department has reportedly underlined that its strategy on Iran will remain unchanged following the killing of the Quds Force commander Qasem Soleimani.

Iranian Revolutionary Guard Corps Commander, Gholamali Abuhamzeh, was quoted by Tasnim news agency on Saturday as saying that 35 vital American targets in the Middle East, as well as Tel Aviv, were "within Iran's reach."

The situation has been escalating in the Middle East in the aftermath of the killing of Iran's top military and intelligence official Qasem Soleimani in a US airstrike on Friday. He was killed alongside 11 others, including the deputy commander of the Iraqi Shia militia Abu Mahdi al-Muhandis.

US State Secretary Mike Pompeo held a phone call with Israeli Prime Minister Benjamin Netanyahu, the State Department said, adding that the discussion was dedicated to the situation in Iraq and Iran’s alleged threats to the region as tensions in the area are rising in the wake of the killing of an Iranian top military commander in Baghdad.

Pompeo subsequently wrote on Twitter that during the telephone conversation with Netanyahu, he emphasized the importance of countering Iran’s alleged malign influence in the region.

"I am always grateful for Israel’s steadfast support in defeating terrorism. The bond between Israel and the United States is unbreakable", Pompeo said.

Five people were wounded when a mortar was launched inside Baghdad's Jadriya neighbourhood on Saturday, Reuters has reported, citing police sources.

The agency added, quoting the Iraqi military, that no deaths have been caused by rocket attacks inside Baghdad's Green Zone and at the Balad airbase outside the city.

If the reports of rockets fired at Balad airbase and the US Embassy Baghdad are true, then I will bet that this isn't Iran, which is considering it's response but the PMF who have less patience and want revenge for the death of Muhandis.

Mohib confirmed the Afghan government's commitment to assuring its people, neighbours and partners "that its soil won’t be used against other countries" and expressed hope that "Iran would continue to play a positive and constructive role in Afghanistan."

"Dr Mohib added that Afghanistan hopes that the United States and Iran would exercise restraint and a peaceful path forward through dialogue," the council added.

French President Emmanuel Macron held a phone conversation with Iraqi President Barham Salih on Saturday, during which he undermined the importance of Iraq's sovereignty, Reuters reported, citing a statement from the French President's office.

Macron and Salih would remain in close contact to try to prevent a further escalation of tensions in Iraq and the broader region, the statement added, as quoted by the agency.

A video has emerged online showing a red flag being raised on top of a mosque in the holy city of Qom in Iran as the country mourns its top military official, Major General Qasem Soleimani, who was killed during a US airstrike in Baghdad on Friday.

The United States chose a new and dangerous path for the Middle East after US President Donald Trump ordered a drone attack in Baghdad that killed Qasem Soleimani, the head of Iranian Islamic Revolutionary Guard Corps’ (IRGC) elite Quds Force, Iranian President Hassan Rouhani said on Saturday, adding that the region cannot expect to find peace as long as the US maintains its presence there.

"Unfortunately, the Americans have entered a new path that can be very dangerous for the region, therefore, in such a condition, close negotiation and cooperation between friendly countries is essential," Rouhani is quoted as saying in a press release.

The Iranian president outlined that the United States can expect to face severe consequences for Soleimani’s death, and stated that Washington's military presence in the Middle East continues to prevent peace in the region.

"Today, all regional countries must believe that as long as America is present in the region, the countries of the region will not find peace," Rouhani remarked.

He also called on other nations to condemn Washington’s decision to conduct a military operation against an Iranian commander on Iraqi soil.

"I hope that we all condemn state terrorism unanimously and that the countries of the region will strengthen their unity, cohesion and understanding more than ever," the president stated.

We stand in solidarity with our ally- the United States exercising the right of self defense, US strikes in Iraq followed series of dangerous and provocative actions by Iranian backed forces, we call on diplomatic efforts to deescalate and reduce tensions @StateDept @SecPompeo

Paris, Berlin and Beijing share a similar view on the need to de-escalate the situation in the Middle East, the French Foreign Ministry said on Saturday, following Foreign Minister Jean-Yves Le Drian's phone conversations with his German and Chinese counterparts, Heiko Maas and Wang Yi.

"This Saturday, January 4, I spoke over the phone with my colleagues, Heiko Maas from Germany and Wang Yi from China," the statement said.

"I acknowledge that France fully shares with Germany the main goal of de-escalation and preservation of the Vienna Agreement … I was also able to verify the similarity of the views of France and China on strengthening our joint efforts aimed at preventing the growth of tension and facilitating de-escalation," Le Drian said, as cited by the foreign ministry.

He added that Paris and Beijing agreed over the issue of maintaining stability and sovereignty of Iraq and the security of the region as a whole.

The sharp disagreements between countries that support Washington, and those that support Tehran, regarding the killing of Qasem Soleimani, the head of Iranian Islamic Revolutionary Guard Corps’ (IRGC) elite Quds Force, could potentially trigger a sectarian conflict between Shia and Sunni Muslims, Pakistani Senator Sehar Kamran said.

The politician stated that US President Donald Trump will seek to portray the attack as a heroic act in order to bolster his domestic support at the start of the election year.

“However, its consequences will be much worse than anticipated. The divided response from pro-Iran and pro-US countries will give rise to a sectarian divide between Shiite and Sunni Muslims, which will further aggravate the situation,” Kamran said.

Kamran warned that both sides must show restraint in the immediate aftermath of the attack, but also stated that Iran might take its time in order to react to the US attack.

“Iran might not react in haste and might not opt for immediate retaliation or direct attack. However, proxies and militia groups can attack and damage US interests / assets,” the senator added.

"The sides expressed deep concern about the possible serious consequences of the American action for peace and stability in the Middle East region," the ministry said in a statement.

The statement added that Lavrov called US actions a "serious violation of fundamental norms of international law."

"Mohammad Javad Zarif and Sergey Lavrov a few minutes ago discussed over the phone the development of the situation in the region and in the world after the killing of general Qasem Soleimani," the ministry said.

The ministry added that Lavrov offered his condolences over Soleimani’s death.

"We all noted, in particular, our agreement in the importance of preserving the stability and sovereignty of Iraq, and the whole of the region in general, as well as the need for Iran to avoid any new violation of the Vienna Agreement," Le Drian said as quoted by the agency.

The United States should stop abusing the use of force and seek solutions via dialogue, China's foreign minister Wang Yi said during a phone conversation with his Iranian counterpart Mohammad Javad Zarif on Saturday, Reuters reported.

“The US military’s risky behaviour violates the basic norms of international relations and only serves to aggravate tensions and instability in the region,” Wang is quoted as saying in a press release on the Chinese Foreign Ministry’s website.

The Chinese foreign minister stressed that Beijing is opposed to the use of military force in international relations. He also stated that military action or the exertion of the “maximum pressure” policy, coined by Washington to describe imposing harsh sanctions on Tehran, is not a means of finding solutions.

“The Chinese side urges the US not to abuse the use of military force, and instead use dialogue to find a solution to the problem. China holds an objective position, and is ready to play a constructive role in maintaining peace and stability in the Middle East,” Wang said.

"The Islamic Republic of Iran does not seek tensions in the region, but the presence and interference of the foreign and extra-regional forces have caused instability, insecurity and escalation of tensions in our delicate region," Zarif said during negotiations with his Qatari counterpart, Mohammed bin Abdulrahman bin Jassim Al Thani.

"Chinese Foreign Minister Wang Yi and [Iranian] Foreign Minister Mohammad Javad Zarif today discussed the development of the situation in the region and in the world after the assassination of General Qasem Soleimani," the Iranian foreign ministry said.

In Addition, Zarif held a conversation with Turkish Foreign Minister Mevlut Cavusoglu regarding the latest events in the region. Cavusoglu said that Ankara expressed condolences over Soleimani’s assassination.

"The foreign ministers of Iran and Turkey discussed the development of the situation in the region and in the world after the death of General Qasem Soleimani. The Turkish foreign minister expresses condolences to the government and the people of Iran," the ministry said.

Washington’s decision to reduce the scale of the US-led coalition’s operations in Iraq will not have serious consequences because Iraq’s armed forces are well equipped and have the capability to ensure the country’s protection and combat any remaining terrorist cells, Iraqi military spokesman Brig. Gen. Yehia Rasool said on Saturday.

"The impact of the international coalition’s decision to limit operations will not be an issue for the Iraqi armed forces … Iraq’s military capabilities are very high and are developing; we can pursue the remnants of terrorist cells," Rasool remarked.

The spokesman added that the Iraqi military was prepared and ready to defend the country’s territory and borders.

Earlier on Saturday, a US defence official stated that the Washington-led coalition would be scaling back operations against terrorist groups in Iraq due to security reasons one day after President Donald Trump ordered an airstrike that killed the head of Iranian Islamic Revolutionary Guard Corps’ (IRGC) elite Quds Force, Qasem Soleimani.