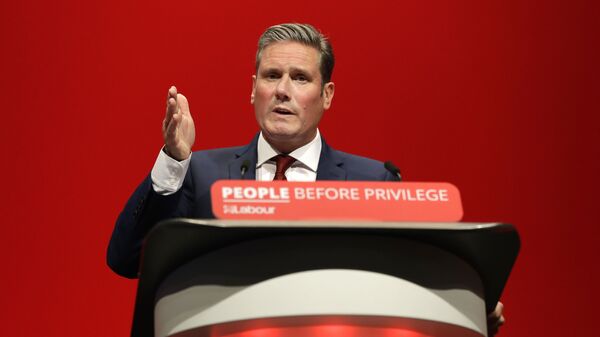 Following the UK Labour party's worst defeat in 70 years, Labour leader Jeremy Corbyn announced his intention to step down before the next election, triggering a new leadership race to replace him and define a new direction for the 120-year-old political organization.

Sir Keir Starmer confirmed on Saturday that he will stand for the position of Labour leader and attempt to be the successor to Jeremy Corbyn.

Currently seen as the frontrunner of those declared candidates, according to YouGov polling, the shadow Brexit secretary wrote in the Sunday Mirror that Labour must "rebuild" to restore trust in the party and its leadership.

“I’m proud to be announcing my candidacy for the Labour leadership in the Sunday Mirror today”, he said. “Britain desperately needs a Labour government. We need a Labour government that will offer people hope of a better future. However, that is only going to happen if Labour listens to people about what needs to change and how we can restore trust in our party as a force for good".

Starmer released a video the same day of his announcement featuring Doreen Lawrence, the mother of murdered British teenager Steven Lawrence, outlining his credentials in giving free legal advice to mine workers, taking the Labour government to the court of Iraq secrets, and unifying Labour's disparate factions.

In 1993, Lawrence was brutally murdered in an unprovoked racially-motivated attack while waiting for a bus in Well Hall. His killers initially had their charges dropped but in light of new evidence, 18 years after the attack, the accused were found guilty of murder.

The case raised questions about race relations and the British police, with the Macpherson report finding the police guilty of “institutional racism”.

I believe another future is possible – but we have to fight for it.

That’s why I’m standing to be leader of the Labour Party.

Join me and together we can – and we will – win: https://t.co/7LQiNItoDU pic.twitter.com/hZQaDBmx3M

In his campaign launch video, however, he pitched his credentials as part of Corbyn's cabinet, a supporter of the Green New Deal, and an opponent of the Iraq war.

He also said in recent weeks that Labour was right to become an anti-austerity party under Corbyn, despite the poor election result.

The new rhetoric from Starmer is likely due to a dense base of Labour members who are strong supporters of the Corbyn leadership and more left-wing policies.

​This comes just hours after fellow Labour MPs Lisa Nandy and Jess Phillips announced on Friday night their own campaign for the top spot.

Starmer, 57, served as the head of the crown prosecution service from 2002, before entering parliament as the MP for Holborn and St Pancras in 2015.

When accused of representing the middle class and London-centric Labour to win back the northern heartlands, he highlights his toolmaker father and nurse mother.

Starmer is a member of Labour Friends of Palestine and co-founded Doughty Street Chambers, a renowned barristers chamber, and is an ardent campaigner against the death penalty on an international level, while advising the Policing Board to ensure compliance with human rights laws by the Police Service of Northern Ireland.

As an ardent Remainer and largely considered to come from the centre of the Labour Party, he is blamed by Corbyn supporters for being the architect of Labour's second referendum policy, which they argue cost them key seats in the Brexit-voting northern heartlands.