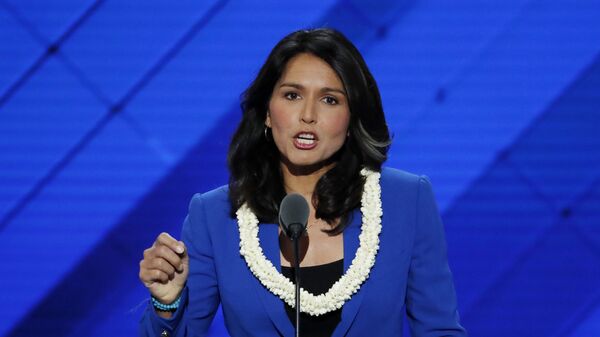 © AP Photo / J. Scott Applewhite
Subscribe
Ilya Tsukanov
All materialsWrite to the author
The Hawaii congresswoman and Democratic presidential candidate, who deployed to Iraq during her service with the US Army National Guard, has repeatedly warned that a conflict with Iran would be “far more devastating” to the US than its Iraq campaign.

Congresswoman Tulsi Gabbard has issued a series of statements slamming President Trump for the drone strike which killed senior Iranian Revolutionary Guard Commander Qasem Soleimani, saying that the president’s actions were dragging the US into a “quagmire” and possible “war with Iran.”

“Trump’s actions last night in bombing the Baghdad airport, with the targeted killing of Iran’s top military general was an act of war with no authorization or declaration of war from Congress,” Gabbard said in a video uploaded to Twitter.

We need to get out of Iraq and Syria now. That is the only way that we're going to prevent ourselves from being dragged into this quagmire, deeper and deeper into a war with Iran. #WWIII #TrumpsWar #StandWithTulsi pic.twitter.com/nb8mLfiywq

“He has put us in a state of war with Iran, and has seriously escalated this tit for tat conflict, pushing us deeper into an endless quagmire,” Gabbard added.

Calling Trump’s Middle East policies “short sighted, damaging, and undermining our national security,” Gabbard called on the White House to “get out of Iraq and Syria” and to “bring our troops home.”

The congresswoman followed up the video with several more tweets, in which she argued that “neocons” such as Senator Lindsey Graham and former National Security Advisor John Bolton were “cheering” Trump’s decision to kill Soleimani.

“We do not seek regime change” Trump declares as he escalates his regime change war against Iran. Neocons like Graham/Bolton are cheering. To all who voted for Trump bc of his antiwar rhetoric, it’s time to realize he lied to u. Stand with me against Trump’s Iran War! #TrumpsWar

End #TrumpsWar now. Remove our troops from Iraq and Syria.

Later, in an appearance on Fox and Friends, Gabbard warned that the escalation with Iran could lead to the deaths of thousands of Americans and scores of Iranians. “I’ve said for a long time that going to war with Iran would make the war in Iraq and even Afghanistan look like a picnic,” she said.

Gabbard, a candidate for president from the Democratic Party and a member of the House Armed Services Committee, deployed to Iraq in 2004 for a 12 month tour of duty as a specialist in a medical unit. Occasionally praising Trump in the past for his non-interventionist rhetoric, Gabbard has also fiercely criticised him over his rhetoric and policy with regard to Iran. In September, after Trump announced plans to beef up the US military presence in Saudi Arabia following an alleged ‘Iranian-backed’ attack on Saudi oil facilities, Gabbard accused Trump of trying to “pimp” out US soldiers, and said that she and her fellow soldiers were not his “prostitutes.” 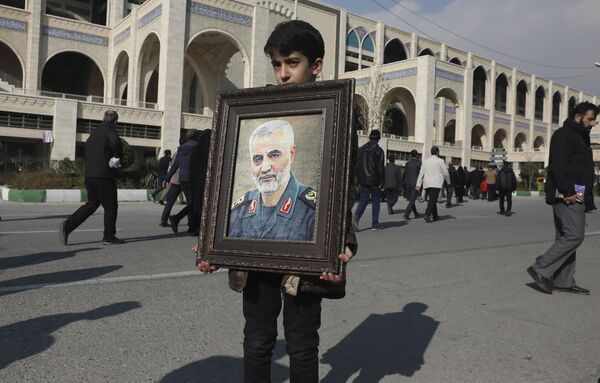 Iranian Revolutionary Guards Quds Force Commander Maj. Gen. Qasem Soleimani was killed in an airstrike at the Baghdad International Airport on Friday morning, when the vehicle he and a senior Iraqi Shia militia leader were riding in was struck by a missile launched by a US drone. Before his death, the commander facilitated the provision of military assistance to Iranian-allied militia groups and governments across the Middle East, including Lebanon, Syria and Iraq. Soleimani coordinated Iranian support to the Baghdad-allied militias known as the Popular Mobilization Forces during the war against Daesh (ISIS).*

President Trump justified the attack later Friday, accusing Soleimani of “plotting imminent and sinister” attacks against Americans. Earlier, Washington claimed that Soleimani was connected to the December 27 attack on a US military base in Kirkuk, northern Iraq, in which one US civilian contractor was killed and several US servicemen were injured.

Soleimani’s assassination led to another serious deterioration in relations between Tehran and Washington, with Iranian leaders threatening to “retaliate” against US forces stationed across the Middle East. Iraqi officials also condemned the US operation, while Moscow warned that there would be “grave consequences for regional peace and stability” as a result of US actions.