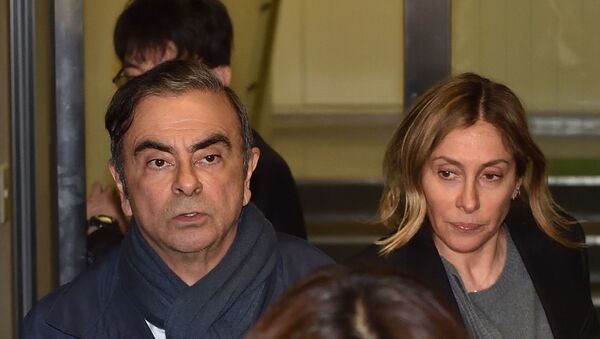 In late December, Carlos Ghosn fled to his native Lebanon on a private jet from Japan, where he was awaiting trial on charges of financial misconduct stemming from his stint as chairman and CEO of the auto manufacturer Nissan.

A lawyer for Carlos Ghosn described his client’s flight from Japan as a “betrayal” but said it was meant to escape from an unfair system rather than evade justice.

Writing in his Japanese-language blog on Saturday, Takashi Takano said he felt angry and betrayed on the news that Ghosn had fled to Lebanon on Monday. The lawyer said he hadn’t been aware of the plan and even had another appointment scheduled with the former Nissan boss.

“But anger was turning to something else as I recalled how he was treated by the country's justice system,” he added. “It’s not hard to imagine that if someone with the same wealth, connections and ability to take action had the same experience [as Ghosn], they would do the same thing or at least consider doing so”.

“Certainly I have been betrayed. However, it is not Carlos Ghosn who has betrayed me,” he concluded.

What happened to Carlos Ghosn?

Ghosn was arrested in Tokyo in November 2018 over allegations of dramatically under-reporting his earnings while at the helm of Nissan and misusing company assets. He denied any wrongdoing and claimed that executives at Nissan were behind his legal woes because they feared he been planning a full-on merger with France’s Renault, which he had also chaired in the past.

The businessman’s detention was widely seen as too harsh and too long by many human rights campaigners outside Japan, including Amnesty International. He was granted bail only in March 2019, after more than 100 days of incarceration, and was re-arrested a month later on new charges.

Ghosn, 65, was released on bail again in April, with authorities closely monitoring his movement and communications. He reportedly departed Japan for Turkey early this week in a private jet and then flew to Lebanon, his mother’s native country.

When in Lebanon, Ghosn said he “would no longer be held hostage by a rigged Japanese justice system.”

How did he escape from Japan?

The details of his dramatic flight from Japan are still unclear; there have been unconfirmed reports that he had been smuggled out in a musical instrument case left over from a Christmas band’s performance at his home in Tokyo.

However, surveillance video shows him leaving the house around noon on Sunday on his own, NHK reports.

While Japan is investigating the case, Turkey has also launched a probe into two flights that Ghosn presumably took, one from Osaka to Istanbul on Monday and another 45 minutes later from Istanbul to Beirut.

Turkish Justice Minister Gul said on Saturday that two foreigners were involved in the transit, but would not comment on their nationality or the role they played. He added that there had been no formal judicial request from Japan in relation to Ghosn’s case.

Turkish authorities on Friday arrested five people suspected of aiding the great escape, including a manager at MNG Jet, the company that operated the two flights, on charges of migrant smuggling.

A day earlier, four pilots and three ground workers at Ataturk Airport in Istanbul were detained in connection with Ghosn’s transfer. MNG Jet explained that Ghosn had used the aircraft illegally. They said the jets were leased by clients that were “seemingly not connected to each other” and that Ghosn’s name did not appear in papers related to any of the flights.

However, the company said, a rogue employee who is now under Turkish investigation, had confessed to having falsified the records and acted “in his individual capacity”.

The arrested MNG Jet manager, meanwhile, told authorities that he assisted in the escape after a former acquaintance from Beirut had threatened his family. “I was scared. I took a man from one jet and put him into the other one at the airport. I did not know who he was,” Turkish daily Hurriyet quoted him as saying.

While in Japan, Ghosn had been forced to surrender his Lebanese, Brazilian and French passports, but was allowed to use a spare French passport to use internally in Japan, which could explain how he was able to depart from Osaka (but doesn’t explain how he managed to avoid detention, given that he was under strict surveillance).

Lebanese authorities on Thursday received a warrant from Interpol, but it’s unclear whether it has been referred to the judiciary or not.