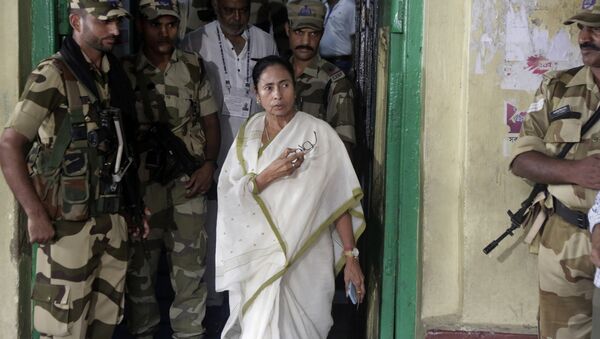 New Delhi (Sputnik): West Bengal’s state chief and the Indian prime minister are well-known political adversaries, often publicly disagreeing on various issues. The base of their tussle is Narendra Modi’s BJP party becoming the main opposition party in West Bengal after the parliamentary elections. But the BJP hasn’t been able to govern the state.

Emphasising that Indian Prime Minister Narendra Modi frequently talks about Pakistan, the chief of India’s West Bengal state took a jibe at him on Friday, asking whether he is an ambassador to Pakistan.

“Why do you always compare our nation with Pakistan? He talks about Pakistan all day. Is he their ambassador? If someone says give me job I have no work, he (Modi) says go to Pakistan”, state chief Mamata Banerjee said during an anti-citizenship law rally in the state’s Siliguri city.

West Bengal Chief Minister Mamata Banerjee in Siliguri: He is the Prime Minister of India, but always talks about Pakistan. Why? We are Indians and we will definitely discuss about our national issues. https://t.co/XS28RuPp8L

Banerjee, the leader of the Trinamool Congress (TMC) party, said Modi should start talking about Hindustan (India), which has its own unique culture and heritage that cannot be compared to Islamabad.

Raising her voice against the Citizenship Amendment Act (CAA), Banerjee said she wants the people of the country to come together and save democracy.

West Bengal CM Mamata Banerjee in Siliguri: I am fighting against #NationalRegisterOfCitizens and #CitizenshipAmendmentAct, join hands with me,requesting all people to come forward to save our democracy pic.twitter.com/dAk5jTKnFx

​During the anti-CAA protests, the state saw severe road and rail blockages due to violent demonstrations.

According to police, nearly 354 people were arrested on charges of instigating violence. Banerjee, while asking people to protest peacefully, led a massive campaign against the controversial law.

With the passing of the CAA by both houses of the Indian parliament and approval by President Ram Nath Kovind, the country has witnessed widespread protests against the law, which allows the granting of citizenship to non-Muslim persecuted immigrants from Pakistan, Bangladesh, and Afghanistan who entered India on or before 31 December 2014.