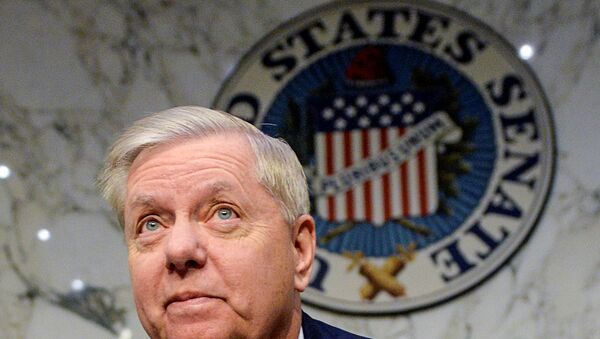 Tensions are high across the Middle East after Qasem Soleimani, the commander of the Iranian Islamic Revolutionary Guard Corps (IRGC) elite Quds Force, was killed in an airstrike on the outskirts of Baghdad authorized by US President Donald Trump.

"He was the right fist of the Ayatollah and we took the Ayatollah's arm off", Graham said in an alleged reference to an image - showing a signet on Soleimani's torn off-hand - that went viral on social media moments after the assassination.

"The intelligence was very strong that Soleimani was orchestrating chaos in Iraq at our expense and throughout the region [...] The president was informed of these potential attacks and he acted. This was a defensive strike to neutralize future attacks that were being planned and executed by Soleimani and the Popular Mobilization Front - the Shiite militias in Iraq", Graham said, cited by Fox News.

New Footage Allegedly Shows Moment US Airstrike Hit Iranian Commander Soleimani's Vehicle
A macabre photo, as it later was made public, bears a striking similarity to a ring Soleimani wore in other photos, but it is not a precise match. Abu Mahdi al-Muhandis, killed alongside Soleimani, reportedly wore similar jewelry. Abu Mahdi led the Iraqi Shiite militia that attacked the US embassy in Baghdad earlier this week.

The US Department of Defence justified Soleimani's assassination as a preventive measure. In a statement, the Pentagon claimed that the top Iranian general was plotting various strikes against the US personnel.