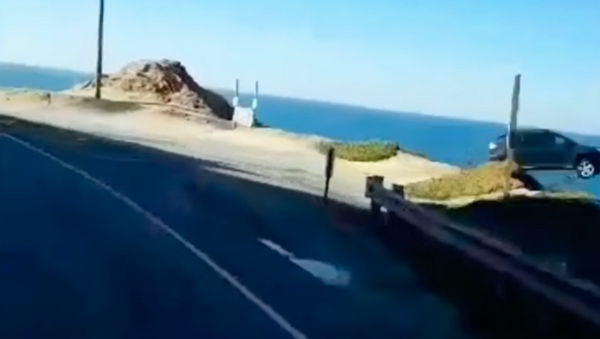 Multiple first responder agencies in California have banded together and launched an investigation after footage emerged earlier this week showing a dark-colored SUV driving off a cliff in California.

In its Facebook post, the sheriff’s office noted that the first calls regarding the shocking Monday incident were received by the San Francisco branch of the California Highway Patrol at approximately 10:38 a.m. local time.

Moments later, several rescue and dive teams were called to the scene as officials with the California Highway Patrol, US Coast Guard, San Mateo County Sheriff’s Office and the California Department of Forestry and Fire Protection launched a search of the area.

However, despite efforts being put forth by authorities, the six-hour rescue effort was ultimately halted Monday due to unfavorable weather conditions.

​US Coast Guard Petty Officer Taylor Bacon told USA Today that efforts have continued to be delayed as a result of dangerous weather and a lack of visibility. "The risk outweighed the potential of finding somebody," Bacon said, adding that "this is a unique situation, and we're working with partner agencies to help find the vehicle."

At present, authorities working on the case have only found tire tracks on the cliff and a few car parts in the choppy waters that may or may not be part of the missing vehicle.

"It's hard to say if it was intentional, if it was an accident or if there was any foul play, but we're looking into everything,” Diaz told the outlet. “We do know from what we've gathered that the vehicle did not collide with the rocks or with the hillside. ... We believe that it might have just submerged into the water."

Diaz estimated the ocean’s depth at the cliffside to be between 30 and 40 feet.