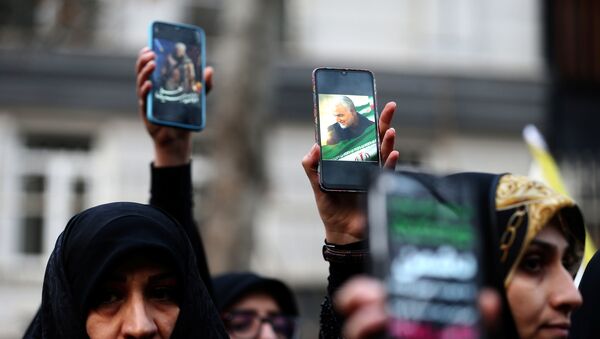 Tensions are high across the Middle East after the United States killed Soleimani, the commander of the Iranian Islamic Revolutionary Guard Corps (IRGC) elite Quds Force, in an airstrike on the outskirts of Baghdad. The US embassy in Baghdad on Friday called on US citizens to depart Iraq as quickly as possible.

Iranian Foreign Minister Javad Zarif on Friday held phone talks with UN Secretary-General Antonio Guterres during which he described the killing of Iranian military commander Qasem Soleimani in Iraq by the United States as an act of terrorism.

Zarif reiterated what he said in the immediate aftermath of the attack, namely that the US is to bear the full responsibility for the consequences of its airstrikes in Baghdad that killed Soleimani.

Iran’s National Security Council warned that it would respond to the death of Soleimani "at the right time and in the right place."

Following the confirmation of the Quds commander's death both by Tehran and Washington, the US Embassy in Lebanon urged American citizens in the country to maintain a high level of vigilance.

The travel warning followed similar statements issued by US diplomatic missions across the region, most notably in Iraq, where Americans were advised to leave the country immediately.

Lebanon is home to the Hezbollah military and political movement, considered to be the strongest Iran ally in the Middle East.

Video With Alleged US Troop Redeployment From Kuwait to Iraq Circulates on Social Media
23:45 GMT 03.01.2020

Bahrain calls on the international community to take measures aimed at ensuring security in the Persian Gulf region after the killing of Qasem Soleimani, the commander of the Iranian Islamic Revolutionary Guard Corps’ elite Quds Force, by the US strikes in Baghdad, the national Foreign Ministry said.

In the earlier hours of Friday, Soleimani was killed by a US drone attack near the Baghdad International Airport. US President Donald Trump said Washington took preemptive action against Soleimani to “stop a war.” An adviser to Iranian President Hassan Rouhani, however, said the United States crossed a “red line” with the attack and Iran's supreme leader Ali Khamenei warned that a "harsh retaliation is waiting" for the United States.

“The Kingdom [of Bahrain] also stresses the importance of immediate action to be taken by the international community, affirming the need to take all necessary measures to ensure security and stability in the region because of its vital and strategic importance for the whole world,” the ministry said in a statement on late Friday.

According to the statement, Bahrain is closely following the developments in Iraq after the death of Soleimani.

The Canadian government has updated its travel advisory for Iraq following a US airstrike that killed Quds Force Commander, Qasem Soleimani, urging all Canadians to leave the country if possible.

"On January 3, 2020, an Iranian military commander and Iraqi paramilitary leaders were killed in a US airstrike near Baghdad International Airport. This attack has led to increased tensions in the region. The security situation could worsen with little warning. There is an increased threat of attacks against Western interests and of terrorist attacks in general. Consider leaving by commercial means if it is safe to do so," the advisory said on Friday.

The Canadian government advised those not able to leave to take extra precautions, including limiting all movement, and monitoring local media for breaking developments.

Abu Ali Al-Askari, a security official from the Kataib Hezbollah group, has called for "opening registration for martyr lovers" to carry out suicide attacks against "foreign invader Crusader forces" following the "assassination of General Qassim Soleimani".

Kataib Hezbollah security official Abu Ali al-Askari: I call for opening registration for lovers of martyrdom to carry out suicide attacks against foreign invader Crusader forces. I'll be honored to be 1st to register & -w/God's permission- 1st of martyrs https://t.co/HtUtUvv2ri

Discussed with Iraqi President Salih @realDonalTrump’s decision to take defensive action to protect U.S. personnel and interests abroad, and I reaffirmed that the U.S. remains committed to de-escalation.

In my conversation today with @masrour_barzani, we discussed yesterday's defensive action and our commitment to de-escalation. I thanked him for his steadfast partnership. We agreed on the need for continued, close cooperation.

American troops are on alert to deploy to "protect [the] US Embassy in Beirut" following the killing of Qasem Soleimani, AP reported, citing an unnamed US official.