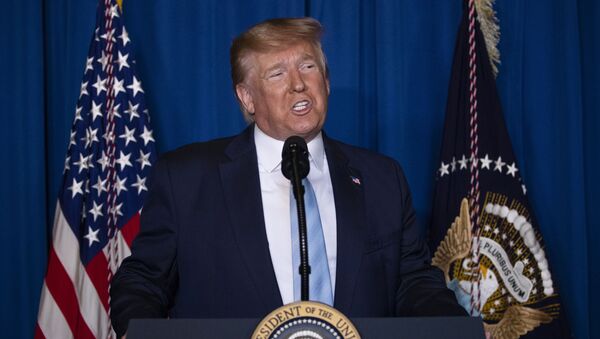 Speaking from Mar-a-lago on Friday, US President Donald Trump addressed for the first time the US airstrike that killed Qasem Soleimani, the head of Iran's Islamic Revolutionary Guard Corps' Quds Force.

In his brief address, Trump indicated that he ordered the recent attack "to stop a war," stressing that his decision was not made to "start a war."

"Soleimani was plotting imminent and sinister attacks on American diplomats and military personnel, but we caught him in the act and terminated him," Trump said. "Under my leadership, America's policy is unambiguous to terrorists who harm or intend to harm any American. We will find you, we will eliminate you. We will always protect our diplomats, service members - all Americans and our allies."

"For years the Islamic Revolutionary Guard Corps and it's ruthless Quds Fore under Soleimani's leadership has targeted, injured and murdered hundreds of American civilians and servicemen. ... Soleimani made the death of innocent people his sick passion, contributing to terrorist plots as far away as New Delhi and London," he continued.

"What the United States did yesterday should have been done long ago - a lot of lives would've been saved. ... We do not seek regime change, however, the Iranian regime's aggression in the region, including the use of proxy fighters to de-stabilize its neighbors must end and it must end not. The future belongs to the people of Iran - those who seeks peaceful coexistence and cooperation, not the terrorist warlords who plunder their nation to finance bloodshed abroad."

"The United States has the best military by far ... if Americans anywhere are threatened, we have all of those targets fully identified and I am ready and prepared to take whatever action is necessary and that in particularly refers to Iran," he added.

Trump did not take any questions from reporters following the statement. Moments earlier, news broke that the US State Department had designated Iraqi Shi'ite militia group Asa’ib Ahl al-Haq (AAH) as a foreign terrorist organization, and that it had also labeled the group's two leaders, brothers Qays and Laith al-Khazali, as "specially designated global terrorists."

Hours after the airstrike, the US Department of Defense issued a release, stating that the launch near Iraq's Baghdad International Airport was aimed at "deterring future Iranian attack plans."