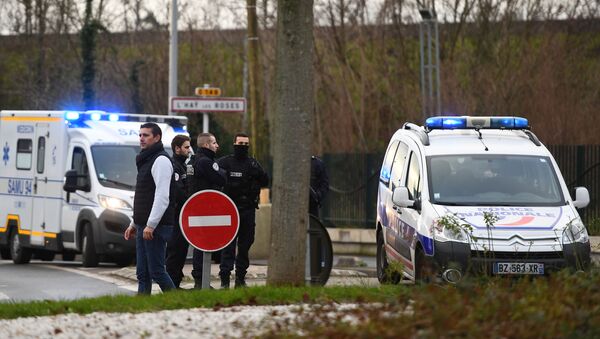 One person died and at least three were wounded, one critically, after a man went on a knife-stabbing rampage before being shot dead by police in the Hautes-Bruyères departmental park in Villejuif commune in the southern suburbs of Paris, France.

Footage capturing the alleged moment in which police in Villejuif commune gunned down a knife attacker, who killed one person at a local park earlier on Friday, has been shared on social media.

In a video posted by Twitter user AnonGilet1, three police officers are seen sweeping through a parking lot, while the perpetrator of the attack remains outside the camera's view.

Fifteen seconds into the video, several shots are heard in the distance prompting the officers to dash towards the sound of the gunfire. Earlier, BFMTV reported that it took at least three shots to take down the knife attacker.