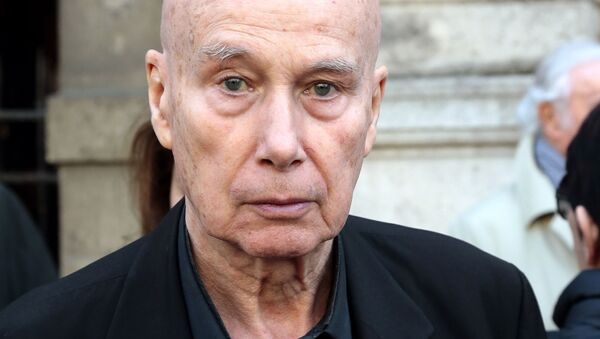 The 83-year-old patriarch of French literature, essayist Gabriel Matzneff, became another figure in the line of rich and famous who have faced accusations of predatory sexual behaviour and harassment in the age of the MeeToo movement. The probe against him was launched after his accuser’s book was released.

The Paris public prosecutor's office has opened an investigation into 83-year-old writer Gabriel Matzneff over claims that he had sexual relations with a minor that were brought up in Vanessa Springora’s book “Consent”. Paris prosecutor Rémy Heitz announced that the probe focuses on allegations about his sexual relationships with those younger than 15 years, namely Springora. This is against the law in France and is constituted as rape.

"Apart from the facts described by Vanessa Springora, the investigation will endeavour to identify any other possible victims of the crimes of the same nature at home or abroad", Heitz said.

The proceedings were launched just 24 hours after the bombshell book by the 47-year-old author, who was recently appointed director of Éditions Julliard, was released. In the autobiographical novel, now shaking France, she told the story of her relationship with Matzneff in the 1980s, saying he seduced her when she was not even 14 years old. The editor said that this cast a shadow over her life, which has been haunted by depression.

Although she asked rhetorically: "Why couldn't a 14-year-old girl love a man 36 years older than her?" adding, however, that it was not her attraction that she had to question, but his.

At the same time, as Springora told the French outlet Le Parisian, she did not plan to file a complaint. But the Paris public prosecutor's office decided to take over the case as its "own-initiative inquiry".

Springora became the first one to step forward and speak out about adolescent girls allegedly seduced by Gabriel Matzneff, who has been pretty outspoken about his taste for lovers being "under 16s", brought up in his 1970s essay "Les Moins de Seize Ans" ("Those Less than 16"), or sex trips with young boys in Asia.

Matzneff, who is a celebrated figure in French literary circles and was awarded the Renaudot Prize for his essays in 2013, has denied any wrongdoing. In his statement to the L'Express magazine, he spoke of an "exceptional love" between him and Springora.

"No, this is not me, this is not what we experienced together and you know it", he said, lambasting the book as picturing him as "a pervert, a manipulator and a predator" and arguing that he does not "deserve the ugly portrait".