Tehran ‘Not Leading Country to War’, but Not Afraid of Any Conflict, Top Iranian Commander Warns 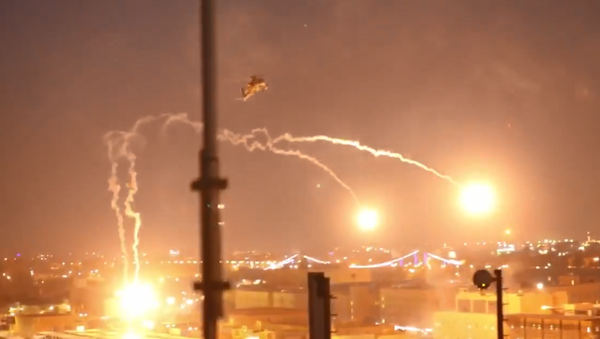 The admonition follows an attack on the US diplomatic mission in Baghdad, where protesters tried to raid checkpoints, smashing windows and setting fire to the outer fence. The attempted intrusion, which Donald Trump claimed was masterminded by Iranian-backed militias, came in response to a string of US airstrikes in Iraq against Hezbollah Kata’ib.

A top Iranian commander said on Thursday that Iran was not moving towards a war, but is not scared of a potential confrontation, the Tasnim news agency reported, shortly after US President Donald Trump blamed the 31 December assault on the US Embassy in Baghdad on Tehran.

"We are not leading the country to war, but we are not afraid of any war and we tell America to speak correctly with the Iranian nation”, Islamic Revolutionary Guards Commander Brigadier General Hossein Salami was quoted as saying.

He went on to warn the US that they “have the power to break them several times over and are not worried".

On Tuesday, on New Year’s Eve, Iraqi protesters set fire to the fences around the US Embassy in Baghdad and proceeded to the checkpoint, smashing windows and battering doors along their way. The protests were held in response to recent American airstrikes against the Iraqi Shia Kata’ib Hezbollah militia.

To halt the vandalism attacks, the Pentagon stepped up security in the area, dispatching 750 additional troops there. The security guards fired tear gas to clear the place from the protesting crowds, some of whom were attempting to climb the compound’s walls.

Iraqi security forces have for now regained control of the area around the embattled compound, as the protesters were pushed away from the entrance to the embassy on Wednesday evening.

Trump accused Iran of orchestrating the vandalism attacks at the US Embassy in Iraq on Tuesday and threatened that Tehran would be held responsible. Iran has rejected the accusation as an “empty” one, calling on the White House to abandon its “destructive policies” in the Middle East.

"If you were logical -- which you're not -- you'd see that your crimes in Iraq, Afghanistan... have made nations hate you", Iran's Supreme Leader Ayatollah Ali Khamenei fired back, adding that the US “can’t do anything".