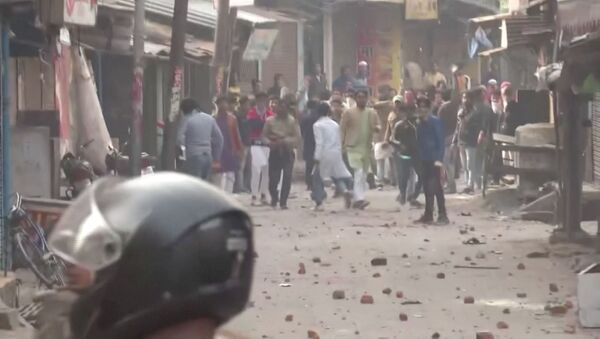 New Delhi(Sputnik) India has witnessed large-scale protests, some violent, against a controversial citizenship law enacted by the federal government early in December. The northern state of Uttar Pradesh saw large-scale violence and arson during the demonstrations that resulted in the deaths of at least at 18 people in clashes with security forces.

A local court in the Muzaffarnagar district of Uttar Pradesh, however, has found charges against four Muslims in connection with violence and rioting in the region to be "baseless".

According to a senior lawyer associated with the case, the court has asked the cops to release them after almost 10 days in dentention.

The court found that at the time of the protest, the accused were taking their father, a patient with kidney issues, to the hospital.

“The cops pulled them out of the car during the crackdown on the protesters and were arrested. It is also reported that the accused were thrashed and bundled into police vans", the lawyer said.

Sources with the Uttar Pradesh Police have claimed that they conceded the four were innocent. They have also stated that the crackdown on protesters was done on government orders.

Earlier, the state government in Uttar Pradesh had announced it would deal with arsonists during the protests and any loss to public or private property would be recovered from them. The state police arrested hundreds of protesters and locked them up in jails.

Eighteen people were officially confirmed dead during violent protests in the state of Uttar Pradesh, the highest number of casualties so far during demonstrations against the new law in the country.

It, however, did not extend the same treatment to Muslims – something which many deem to be a violation of the Indian Constitution and discriminatory.