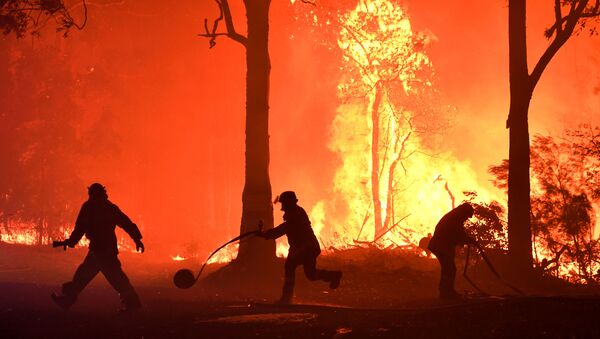 The natural disaster has already killed at least 8 people, while 17 are still missing. Hundreds of thousands of hectares are engulfed by fire and immense smoke has covered Sydney, even reportedly turning glaciers in New Zealand brown.

Australian authorities are calling on tourists to leave Alpine National Park in Victoria and Kosciuszko National Park in New South Wales amid escalating fires in the country. According to reports, two major fire fronts burning in Victoria could soon merge, creating a bushfire of catastrophic power.

​The situation is expected to be extremely dangerous by the end of the week, as the weather forecast for Saturday promises high temperatures that might reach well over 40 degrees Celsius (104 degrees Fahrenheit).

I spent New Year’s eve huddled in a bunker while a firestorm incinerated my family’s farm. I spent much of my time thinking of my local federal member @M_McCormackMP so I wrote him this letter.https://t.co/4qC3OpmnTo

​At least 3 million hectares of land and around 700 homes have reportedly burned down across the country during the recent bushfires that started in November.