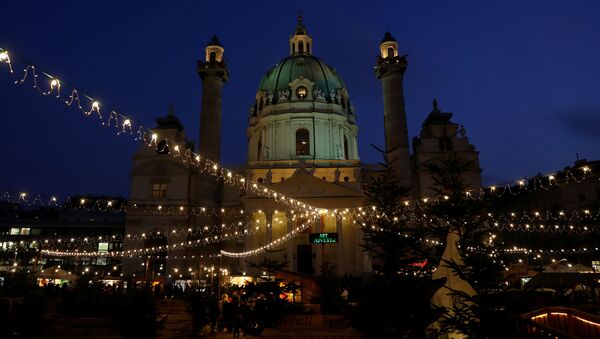 VIENNA (Sputnik) - The program of the new Austrian government, which was released on 2 January, noted the need to consider the gradual lifting of sanctions against Russia.

"With progress in the implementation of the Minsk agreements [on the settlement of the conflict in Ukraine], it is necessary to consider the gradual lifting of sanctions", the programme said.

The document, however, added that Vienna was observing anti-Russian sanctions in accordance with the European Union's decision.

The programme also stated that Vienna would continue to promote direct ties between Russian and Austrian civil societies through the so-called Sochi Dialogue.

The Austrian People's Party and the Green Party on 1 January announced the successful completion of coalition negotiations. On 2 January, the parties' leaders, Sebastian Kurz and Werner Kogler, unveiled the new government's programme for 2020–2024. Kurz is set to return to power and become the new chancellor.

Major Scandal Involving “Russian” Girl in Austria: Suspects Behind Explosive Video Arrested
Relations between Russia and the West deteriorated in the wake of the conflict in eastern Ukraine and the successful referendum on Crimea's reunification with Russia. The European Union, among other Western countries, has accused the Kremlin of interfering in Ukrainian internal affairs and introduced sanctions against Russia. Moscow, which denied the meddling claims, retaliated by switching over to an import phase-out and imposing countersanctions.

However, some EU countries, including Austria, have recently begun questioning the effectiveness of the sanctions amid financial and economic losses and started looking for different solutions to problems between Russia and the bloc. Various Austrian politicians have voiced the need for the end restrictions.

Moscow has opposed linking the Minsk agreements implementation with the sanctions relief, saying that Russia has never been a side to the conflict in Ukraine.