ATEEZ, SF9, Jaejoong, and Others: Most Anticipated K-Pop Releases Expected in January 2020 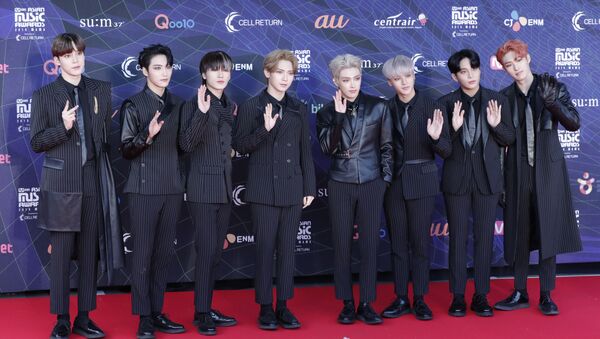 The beginning of a new year always means a fresh start and new releases from various artists around the globe, and South Korea is no exception.

With the start of 2020, a number of K-pop artists have confirmed comebacks this January, with more yet to come. Check out the following list to learn more:

Having debuted in 2018, the K-pop boy band consists of eight members and has already caused a stir among fans of the genre. Leaving behind its first studio album, the group confirmed its comeback on 6 of January with its new “TREASURE EPILOGUE: Action to Answer”. After releasing a series of posters and a set of personal teasers, the K-pop group ATEEZ, which is rapidly gaining fans, released their video teaser for the upcoming album.

The first full album, titled “First Collection”, by the nine-member K-pop band is expected to be released on 7 January after a six-month break since their last release in June and world tour. The group has already dropped individual and group teasers.

The former member of the project group Wanna One, which was formed after the Mnet survival show "Produce 101 Season 2" in 2017 and disbanded in 2019, has made a successful solo debut as a singer and actor. Now his career is expected to reach a new height, with a digital single announced to be released later this month.

K-pop star Kim Jae-joong, known to the public under the mononym Jaejoong, will share the mini album “Aeyo” on 14 January. This will be his second Korean album after the singer left legendary group TVXQ (sometimes referred to as DBSK). The artist will also hold a fan meeting in Seoul on 18 of January.

How wonderful! Everybody check out this cool Jaejoong’s AsiaTour Concert in Seoul poster! Let's be together on his new album release date and concert soon!
IG:https://t.co/qqcLsxXlf3
FB:https://t.co/WxN5rrYcgm#ジェジュン #김재중 #JAEJOONG pic.twitter.com/kON3FHydnP

The six-member South Korean girl group GFriend confirmed they will have a comeback in February after a gap of seven months in their activity. Meanwhile, the group is preparing for a fan meeting in Seoul on 18 January.

GFRIEND would be making their comeback on February 3.
Source Music said “We plan to reveal GFRIEND’s comeback schedule to fans as soon as possible.”
Link-->https://t.co/ubT7g3jWZK
• Follow @frenchikpop for more… https://t.co/ecL8U9D4R8

The K-pop phenomenon BTS is currently working on an album, according to media reports. It is expected that the group will also have a comeback in February 2020.