Protests Outside US Embassy in Baghdad Resume for Day 2 - Video 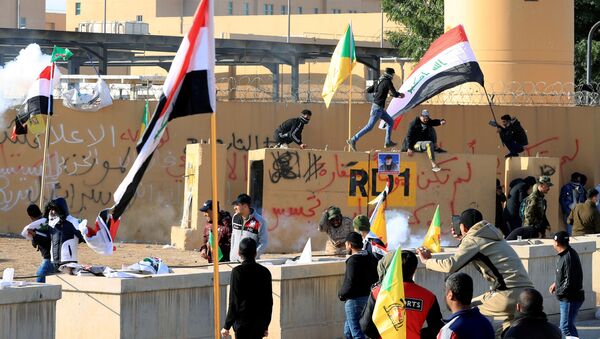 President Donald Trump said a day earlier that the US Embassy in Iraq was safe despite being attacked by people protesting against American airstrikes on Shia militants in Iraq, and warned that Iran would be held fully responsible for any damage caused to US facilities.

Iraqi protesters continue rallying outside the US Embassy in Baghdad for a second day in a row.

On 31 December, the protesters stormed the US Embassy and torched its outer fence in protest against recent US airstrikes targeting Kata’ib Hezbollah Shiite militants in Iraq and Syria.

The protests come after the Pentagon on Sunday said it had carried out "defensive strikes" against five Kata'ib Hezbollah facilities in Iraq and Syria that launched after the Pentagon accused what it deemed an "Iran-backed militia of killing a US contractor in an attack on a Kirkuk base.