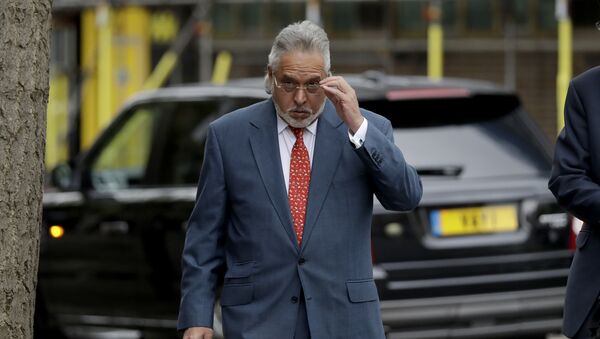 New Delhi (Sputnik): A consortium of state-funded Indian banks has filed a fresh plea in the UK High Court seeking full disclosure of assets owned by Vijay Mallya, an Indian liquor baron on the run. Mallya faces criminal charges in India for failing to return about $1.5 billion in loans he obtained from banks.

An Indian court that deals with money laundering crimes in western Mumbai has allowed banks that lent money to fugitive liquor tycoon Vijay Mallya to liquidate his seized assets in order to recover their losses.

According to a senior officer of the Enforcement Directorate (ED), India’s top economic intelligence agency, the seized assets would help the lenders recover around $1.5 billion (Rs 11,000 crore)

“The seized assets which we had attached mainly comprise of shares which are much more than what was advanced by the lenders”, the ED officer said.

He further added that the court has also said all parties affected by the order can appeal to the Bombay (now Mumbai) High Court until 18 January.

In 2014, the state owned State Bank of India declared that Mallya owed it several million.

The fugitive businessman was a member of Rajya Sabha, India’s upper house of parliament, when he escaped to London in 2016, with Indian law enforcement authorities on his trail.

The banks, led by the State Bank of India, hope to confiscate Mallya’s high-value offshore assets to recover part of what they owed. The assets are owned by a trust established in the name of the liquor baron’s father, but he has claimed he had no interest in those entities.

India has sought Mallya’s extradition from the UK to face a criminal trial in the country for failing to repay loans given to him and his now defunct Kingfisher Airlines by state-funded banks. The loans were believed to have been obtained through falsely represented facts.

The UK ordered the extradition of Vijay Mallya to India in February 2019, but he managed to obtain a reprieve from the courts and remains in London. His latest appeal in the UK High Court will now come up for hearing in February 2020.