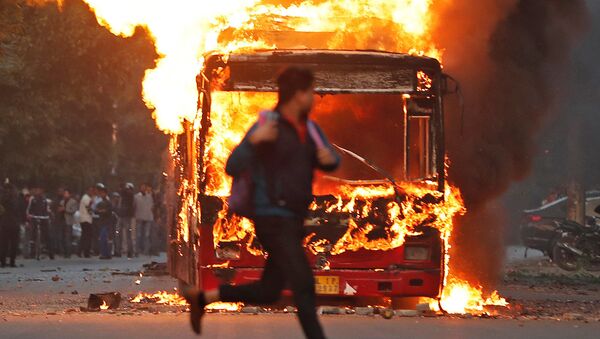 New Delhi (Sputnik): India witnessed large-scale protests, some violent, against a controversial citizenship law that was enacted by the federal government early in December. The northern state of Uttar Pradesh witnessed large-scale violence and arson during the demonstrations, killing at least 18 people in clashes with security forces.

Uttar Pradesh Police have found evidence of involvement of a radical Islamic organisation – the Popular Front of India (PFI) – and arrested over two dozen members of the PFI for allegedly inciting violence during the protests against the Citizenship Amendment Act (CAA).

India’s federal Home Ministry, acting on a complaint from Uttar Pradesh Police to ban the PFI, will soon initiate an investigation into the activities of the outfit.

According to officials privy to the development, the government will first gather intelligence about the outfit and will also rope in the National Investigation Agency – India’s apex agency for combatting terror.

Director General of Uttar Pradesh Police O.P. Singh indicated on Tuesday, 31 December that he had written to the federal Home Ministry to “impose a ban on Popular Front of India (PFI) as investigations found PFI’s involvement in the violent protests against Citizenship Amendment Act that took place on 19 November”.

UP DGP OP Singh writes a letter to the Ministry of Home Affairs, requesting to 'impose a ban on Popular Front of India (PFI) as investigations found PFI's involvement in the violent protests against #CitizenshipAmendmentAct that took place on 19 December.' pic.twitter.com/cMco8WBaLW

The UP Police seized incriminating documents used by the PFI to spread misinformation about the CAA and the proposed National Register of Citizens.

More than 18 people were killed during the protests in the state of Uttar Pradesh, the highest number of casualties so far to have happened during demonstrations against the new law.

It, however, doesn't extend the same treatment to Muslims – something which many deem to be a violation of the Indian Constitution and religious discrimination.