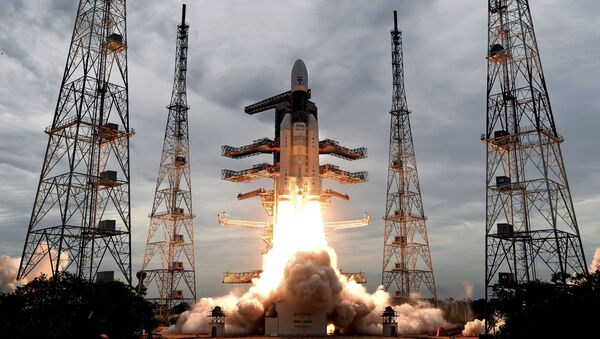 New Delhi (Sputnik): Three months after suffering a major jolt in its second lunar mission, India's space agency ISRO has announced a new mission, Chandrayaan-3, on New Year’s Day. New Delhi's ambition to soft-land on the Moon had crashed when the Chandrayaan-2 failed to touch down on the lunar surface as planned on 7 September 2019.

Indian Space Research Organisation (ISRO) Chief K. Sivan on Wednesday announced the government has approved a third lunar mission and that work has already commenced on the project.

"Chandrayaan-3 will have a lander, rover, and a propulsion module. The government has approved the project and we have formed the project team. We have initiated this project and work is going on very smoothly on it", ISRO chief Sivan said during a media briefing.

On Tuesday, India’s Minister of State for Space Jitendra Singh said that the second lander mission will be a "cost-effective mission and most likely to be launched in 2020”.

He also informed that the agency has planned more than 25 space missions for 2020.

Sivan said that a lot of design work has been completed for a manned mission, Gaganyaan. "There will be several tests that we'll do this year. Also, the final four astronaut-elects have been selected and they'll begin training in Russia from the third week of January", he added.

India’s manned space mission Gaganyaan will coincide with the 75th anniversary of its independence. In August 2019, India ordered Russian space equipment to ensure the timely preparation of the mission, which will also include two unmanned flights, in December 2020 and July 2021.

The second mission Chandrayaan-2 spacecraft comprised of an orbiter, lander, and rover was successfully launched on-board a domestically-produced GSLV MK III-M1 rocket on 22 July 2019 but lost contact with ISRO's Earth Station just minutes before the scheduled soft-landing near the Moon's South Pole in September.

A successful soft landing on the Moon's surface would have made India only the fourth country — after the United States, Russia, and China — to achieve the feat.

Chandrayaan-1, launched in October 2008, was India's first lunar probe. The Chandrayaan-1 spacecraft entered the Moon's orbit – making India one of the countries to taste success in its maiden attempt.

One of the objectives was to prepare a three-dimensional atlas (with high spatial and altitude resolution) of both the near and far side of the Moon. It aimed at conducting chemical and mineralogical mapping of the entire lunar surface for distribution of mineral and chemical elements such as magnesium, aluminium, silicon, calcium, iron, and titanium as well as high atomic number elements such as radon, uranium, and thorium with high spatial resolution.