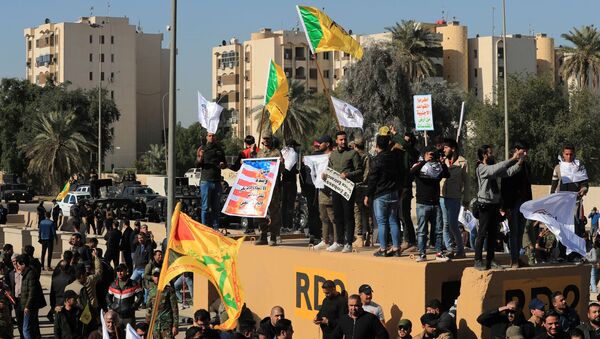 © REUTERS / THAIER AL-SUDANI
Subscribe
While Washington leaders have attempted to draw parallels between the Iraqi protesters demonstrating peacefully for months and the violent group who attacked the US Embassy in Baghdad Tuesday, the truth is that nonviolent protesters have also been victims of these violent groups, an Iraqi-American activist told Sputnik.

Several hundred protesters stormed the International Zone (IZ) in central Baghdad on Tuesday, laying siege to the US Embassy there and prompting police to fire tear gas into the crowd.

​The protesters were ostensibly angry about a series of US airstrikes the previous day against the Iraqi Shiite militia Kata'ib Hezbollah that killed 25 militia members and injured 51 other people. Those airstrikes, in turn, came in response to an attack on the US base in Kirkuk, Iraq the day prior that killed a US contractor. The Iraqi government has strongly condemned the US airstrikes, noting their agreement with Washington doesn’t allow unilateral military actions.

The episode echoed a previous incident late last month in which protesters burned down the Iranian consulate in Najaf, placing an Iraqi flag atop it. However, Tehran at the time rejected the notion it was Iraqi protesters who orchestrated the attack, saying it was “an organized attack,” Sputnik reported.

Widespread reports Tuesday portrayed the people attacking the US embassy as part of the protest movement that has rocked Iraq for months, forcing Prime Minister Adel Abdul-Mahdi to pledge his resignation and seeking answers for widespread unemployment, lack of infrastructure and social investment and government corruption. Hundreds of protesters have died in the violent clashes with police and with other groups and thousands more have been injured.

Basma Alawee, founder of the Iraqi Activists Society and the Florida Refugee Organizer for "We Are All America"; and Maestro Karim Wasfi, president and founder of Peace Through Arts Global Foundation and former conductor of the Iraqi National Symphony Orchestra, told Radio Sputnik’s By Any Means Necessary Tuesday that the protesters who attacked the US embassy aren’t those who have been camped out in Tahrir Square across the river from the IZ for months on end, but rather the same groups who have been massacring those peaceful protesters.

“Sadly, now people start to care. We have been asking the world leaders and human rights organizations to step in since October 1,” Alawee told hosts Sean Blackmon and Jacquie Luqman. “We lost over 600 peaceful protesters, and I don’t have the numbers of the people who’ve been kidnapped.”

Alawee noted that “the groups who are attacking the US embassy in Iraq are the same groups attacking the unarmed protesters in Iraq,” including Asa'ib Ahl al-Haq and Saraya Tali'a Al Khurasani, two Shiite militias that are part of the Iraqi Popular Mobilization Forces.

“It was inevitable that the tension would reach a level of what we have seen in the last few hours,” he said, noting the existence of a report from three days ago, before even the Kirkuk attack, that set this sequence of events in motion, warning that demonstrators might march “into the area of the IZ.”

“The simple fact is, basically, I think, the Iraqi representation of ‘a government’ has shown enough double standards” in how it relates to other countries’ involvement in Iraq, Wasfi said, noting that “other nations” apart from the US have also exercised influence over Iraqi affairs.

“We don’t have a strong government in Iraq who invests in their own people,” Alawee said. “We have governments who are hand-by-hand with other countries in killing their own people. So it’s really sad to see now the world asking what’s happening in Iraq.”

Alawee said the world is typically only concerned about Iraq’s oil.

“Now the world is [concerned] about the American embassy. We’ve been mobilizing, we’ve been organizing, we’ve been meeting with elected officials and educating them about what’s happening, and there was no follow-up emails, no concern shared with the Iraqi community here in the US. And now today you see many of these elected officials and the president and many people in power tweeting and posting and sharing concerns about what’s happening in Iraq. I mean, we’ve been talking about this since October.”

000000
Popular comments
This certainly sounds like so many invented causes and reasons to accuse Iran for actions in reality committed by groups controlled by the CIA/Mossad as a means to push a war on Iran.
Regula
1 January 2020, 03:09 GMT4
000000
I think if you dig deep enough you will find Israel's mercenaries the Kurds behind this. They are hated all over the mideast after what they have done in Syria.
parkerjoe
1 January 2020, 03:49 GMT3
000000
Newsfeed
0
New firstOld first
loader
LIVE
Заголовок открываемого материала
Access to the chat has been blocked for violating the rules . You will be able to participate again through:∞. If you do not agree with the blocking, please use the feedback form
The discussion is closed. You can participate in the discussion within 24 hours after the publication of the article.
To participate in the discussion
log in or register
loader
Chats
Заголовок открываемого материала
Worldwide
InternationalEnglishEnglishMundoEspañolSpanish
Europe
DeutschlandDeutschGermanFranceFrançaisFrenchΕλλάδαΕλληνικάGreekItaliaItalianoItalianČeská republikaČeštinaCzechPolskaPolskiPolishСрбиjаСрпскиSerbianLatvijaLatviešuLatvianLietuvaLietuviųLithuanianMoldovaMoldoveneascăMoldavianБеларусьБеларускiBelarusian
Transcaucasia
ԱրմենիաՀայերենArmenianАҧсныАҧсышәалаAbkhazХуссар ИрыстонИронауОssetianსაქართველოქართულიGeorgianAzərbaycanАzərbaycancaAzerbaijani
Middle East
Sputnik عربيArabicArabicTürkiyeTürkçeTurkishSputnik ایرانPersianPersianSputnik افغانستانDariDari
Central Asia
ҚазақстанҚазақ тіліKazakhКыргызстанКыргызчаKyrgyzOʻzbekistonЎзбекчаUzbekТоҷикистонТоҷикӣTajik
East & Southeast Asia
Việt NamTiếng ViệtVietnamese日本日本語Japanese俄罗斯卫星通讯社中文（简体）Chinese (simplified)俄罗斯卫星通讯社中文（繁体）Chinese (traditional)
South America
BrasilPortuguêsPortuguese
NewsfeedBreaking
15:17 GMTRussian Officials Assess Proposal to Populate Siberia With 'Resurrected' Woolly Mammoths
15:13 GMTParis to Bill Canberra for Cancellation of Submarine Deal After AUKUS Pact
14:51 GMT'Britney VS Spears': Pop Star's Fiancé Accuses Docu Makers of Earning Profit From Her Story
14:41 GMTRussian Union of Journalists Chief Slams 'Unacceptable' US Sanctions Against Colleagues
14:31 GMTUS Investment Firm Purchases Italy's Oldest Football Team
14:29 GMTUS to Find Ways to Get More Help to Haitian Migrants After US Envoy Resigned, State Dept. Says
14:25 GMTAnthony Joshua Says He Would ‘Fight King Kong' if He Had to as He Defends Titles Against Usyk
14:18 GMTFormer Nazi Helmut Oberlander Dies in Canada Before He Could Be Deported, Reports Say
14:07 GMTWhat's Behind Africa's Increasing Drive to Launch Satellites?
14:06 GMTExpo 2020 in Dubai Set to Boost Economic Development in Arab World, Organiser Says
13:58 GMTTwo Afghan Evacuees Charged With Sexual, Physical Assault in US, Justice Department Says
13:51 GMTBritish Government Preparing for 'Worst-Case Scenario' of Gas Prices, Says MP
13:43 GMTOutrage as Missouri High School Students Reportedly Come Up With Petition to Reinstate Slavery
13:42 GMTEC Does Not Expect Increase in Smartphone Prices Over Universal Charging Port Regulation
13:26 GMTAmericans Favour Trump Over Biden After Afghanistan Pullout Disaster, Poll Says
13:25 GMTComputer Game to Measure Children's Mental Development Launched by MSUPE
13:21 GMTDay 3 of 76th Session of UN General Assembly
13:18 GMTRoscosmos Starts Preparations for Landing First Russian Cosmonaut on Moon
13:18 GMTAs Modi Meets US Firms, Google Moves Court Against India's Competition Watchdog Over 'Leaked' Report
13:07 GMTBP Says It's Temporarily Closed Some UK Sites Due to Lack of Diesel, Unleaded Supply Problems