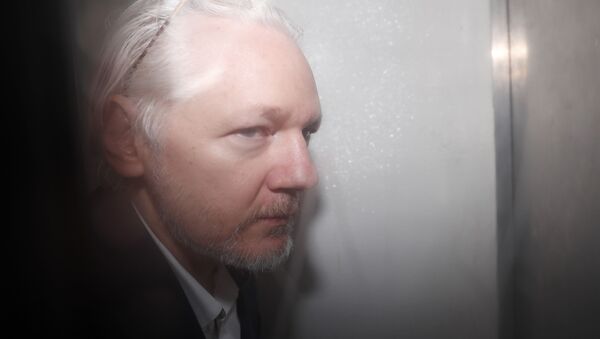 Mohamed Elmaazi
All materialsWrite to the author
The United Nations’ special rapporteur on torture has been pressing the UK, US, Swedish, and Ecuadorian governments to properly investigate and address expert evidence showing that the WikiLeaks publisher has been subjected to “psychological torture”.

Nils Melzer, the UN’s torture expert, published on 31 December a letter that he sent to the British government in which he blasts their failure to address evidence that Julian Assange has been tortured. Melzer published the letter, dated 29 October 2019, after noting on twitter than more than 60 days had elapsed without a response from UK authorities. He characterised the government’s continued failure to cease the unlawful treatment of the WikiLeaks publisher, and its failure investigate the complicity of British officials, as a violation of the UK's international legal obligations.

Melzer accuses the UK government of “severely undermin[ing] the credibility of the UK’s commitment to the prohibition of torture and ill-treatment, as well as to the rule of law more generally”. He explains that his official report regarding Assange’s condition resulted from a four hour visit to the Wikileaks founder in Belmarsh maximum security prison, accompanied by two experienced medical experts specialised in examining torture victims. Melzer found that the British state had “contributed decisively” to Assange’s condition based upon “careful evaluation of the available evidence”.

Melzer, who worked for 12 years as a lawyer for the International Committee of the Red Cross, said that Assange’s treatment since 2010 means that his conviction for skipping bail is essentially arbitrary:

​He also said that the anxiety and stress resulting from his treatment have directly contributed to his condition:

(5/6) The resulting anxiety, stress & hopelessness have significantly contributed to & are currently the primary cause for #Assange’s continued exposure to psychological torture or other cruel, inhuman or degrading treatment or punishment.

On 27 May 2019 Melzer sent an 18 page letter with evidence that Assange, whom the UN working group on arbitrary detention has repeatedly said was illegally detained and should be freed – since 2015, exhibited symptoms of “psychological torture”. After detailing the sources of Assange’s mistreatment[pdf, pp5 -9] Melzer expressed ‘grave concern’ that “Assange has been, and currently still is, exposed to progressively severe pain and  suffering,  inflicted  through  various  forms  and degrees  of  cruel,  inhuman  or degrading treatment or punishment, the cumulative effects of which clearly amount to psychological torture”.

He requested a response from the UK government explaining how they would investigate these claims and address the continued mistreatment of Assange.

UK Government Rejects Claim That Assange Has Been Tortured

More than four months later on 7 October 2019 Julian Braithwaite, the UK’s permanent representative to the UN, returned with a one page response. In it Braithwaite denies that “Assange has been subjected to torture in any form as a result of actions by the UK Government”. He said the UK government never participates in or condones the use of torture and rejected the idea that Assange was ever arbitrarily detained.

On 22 November 2019 more than 60 medical professionals wrote an open letter to the UK home secretary Priti Patel urging her to take immediate action to protect Assange’s life by transferring him to a teaching hospital. After the home office failed to respond they followed up with a second letter dated 4 December 2019 reiterating their “grave concern” that Assange could die from “deliberate medical negligence” and blasted the UK government’s behaviour as, “incompatible with medical ethics and unworthy of a democratic society bound by the rule of law”.