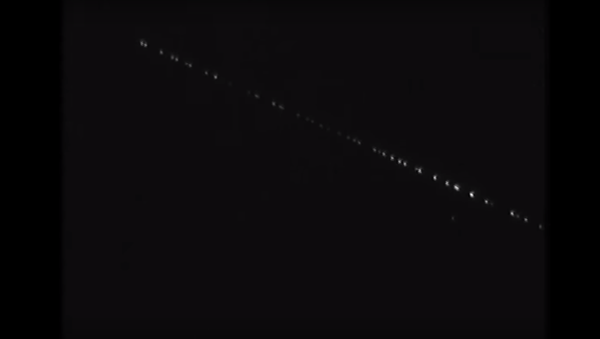 Dozens of shining objects crossed the night sky in Wales and other parts of the UK in December, prompting speculation about what they could have been. The theory of alien visits inevitably popped up, as people processed the unusual show.

A mysterious dance of lights over the Welsh countryside prompted locals to inundate North Wales Live with reports of sightings and requests for explanations for the mysterious show, also sparking alien-themed speculations.

One local, Mel Clark, took a picture of the enigmatic “string of pearls” over Llanddaniel Fab on Anglesey while his friend spotted the “moving stars” over a place called Menai Bridge.

"Thought these were stars until I stopped walking and realised they were moving. A straight line of 20-30 I’d say, all uniform distance apart. A friend is convinced she saw the same thing ... I’m guessing planes although there was no sound. Can you shed some light on it, she is convinced it’s UFOs!!! I’m a non believer.. sticking with planes!!” he revealed to the outlet.

Another witness, Taylor Herbert, who filmed the lights over Oswestry, shared the view that they were planes.

"Do you know any detail on the huge line of planes that have just flown over our house. Must have been about 20 aircraft i assume", he told the media.

However, as the scientific company the East Anglian Astrophysical Research Organisation reassured night gazers, the nocturnal show was not a result of extraterrestrial intelligence, but rather due to human ingenuity. The EAARO stated that the lights were “NOT UFO's but satellites that are part of the Space-X Starlink project to provide accessible internet to everyone”.

If you see these over the UK they are NOT UFO's but satellites that are part of the Space-X Starlink project to provide accessible internet to everyone.

Elon Musk’s Starlink satellites have already caused similar concerns across Europe. Earlier this month, the string of lights worried locals as they passed over the German capital Berlin and neighbouring Brandenburg. As the local outlet Morgen Post reports, Google searches for "UFO Sighting", "Meteor", and "Meteorite" spiked, while platforms dedicated to UFO sightings registered numerous reports about what users described as a "string of pearls" or "fairy lights".

By November, when the last launch took place, SpaceX had deployed over 120 satellites, with a total of nearly 12,000 satellites to be deployed by the mid-2020s. The number may possibly be expanded to 42,000.

SpaceX’s Plans to Clutter Space With Internet Satellites May Ruin Our Chance of Finding Alien Life
However, the mega-constellation project has generated grave concerns in the scientific community. After the first batch was deployed, the International Astronomical Union issued a statement saying that such constellations “can pose a significant or debilitating threat to important existing and future astronomical infrastructures”. Astronomers complained in November that the new batch of satellites was ruining their observations of the universe, months after the SpaceX boss promised to take steps to make them less reflective.
Newsfeed
0
Access to the chat has been blocked for violating the rules . You will be able to participate again through:∞. If you do not agree with the blocking, please use the feedback form
The discussion is closed. You can participate in the discussion within 24 hours after the publication of the article.
To participate in the discussion
log in or register
loader
Chats
Заголовок открываемого материала