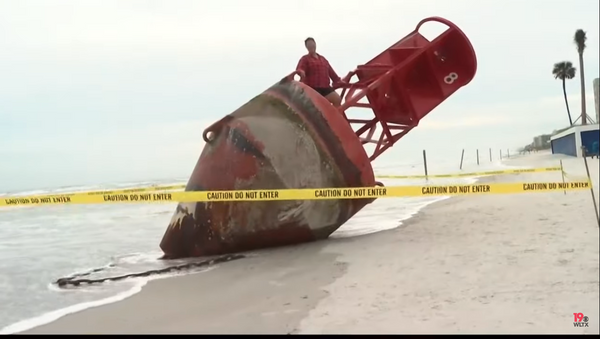 Spectators flocked to Florida’s New Smyrna Beach this past weekend to get a closer look at a massive, 6.5-ton (5,8967-kilogram) buoy that came to a halt after it went missing twice over the past few years.

The “Red No. 8,” a large navigation buoy reported to have previously washed away from Charleston, South Carolina, in Hurricane Irma and once again during Hurricane Dorian, turned up on central Florida’s New Smyrna Beach on December 28.

“There are quite a few people coming down to take a look and get photos,” Capt. Tamra Malphurs of Volusia County Beach Safety Ocean Rescue told Charleston-based outlet the Post and Courier. “It has not been a major problem, just an eyesore.”

While individuals are currently taking photos in front of the behemoth buoy, the Post and Courier reported that a crew with the US Coast Guard Station Ponce De Leon is scheduled to pick the floater up on January 2.

The repeat escapee first went missing from Charleston during Hurricane Irma, which claimed the lives of at least four South Carolinians in 2017, and washed up on South Carolina’s Hilton Head beach.

“The buoy broke away in 2017 and was recovered shortly thereafter,” Petty Off. 2nd Class Ryan Dickinson, spokesman for US Coast Guard Sector Jacksonville, told the Daytona Beach News-Journal. “Then, after Hurricane Dorian rolled through, [Coast Guard Sector Charleston] did an inspection of all the buoys.”

The @USCG is working with the City of New Smyrna Beach and Volusia County to create a plan to remove the red lighted buoy that washed ashore. The buoy, originally from Port Royal Sound, SC, was displaced sometime after Hurricane Dorian. pic.twitter.com/Up6EoofkEb

However, its recent beaching showed that the Red No. 8 had once again broken free.

“It’s definitely given us a headache, that’s for sure,” Dickinson admitted.

The 12-foot, 1,200-pound floater had “Hydrometrical Service of the USSR” etched in Cyrillic on its body and is believed to have floated approximately 350 miles from Cuba, according to 7News Miami.

The Coast Guard has not determined how the US buoy, which was chained to a piece of concrete sitting on the ocean floor, came free from its position in 2017.