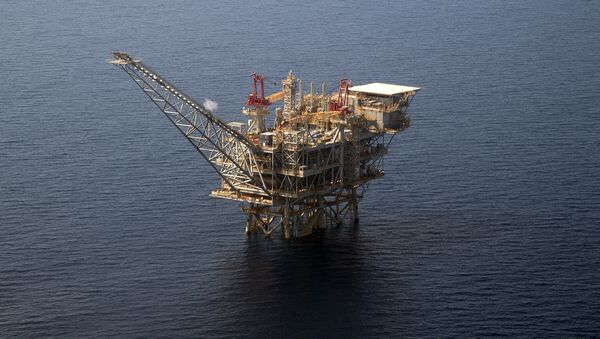 © AFP 2023 / AHIKAM SERI
Subscribe
International
India
Africa
Elizabeth Blade
All materials
Prime Minister Benjamin Netanyahu is expected to head to Greece in the coming days to sign an agreement with the Greek and Cypriot governments for a pipeline designed to ship gas from the eastern Mediterranean to Europe.

A 1,200-mile pipeline will be able to transfer between nine to twelve billion cubic metres of gas per year between Israel, Cyprus, and Greece before reaching its final destination in Italy and other southeastern European countries.

But there is one problem - Turkey. The discovery of the hydrocarbon reserves in the eastern Mediterranean has triggered a spat between Cyprus and Ankara, which has occupied the north of the Mediterranean island since 1974.

Turkey views the upcoming trilateral deal with suspicion and has already signed an agreement with Libya to continue to search for oil and gas off Cyprus despite objections by Nicosia and the international community that says Turkey has no right to do so.

Dr Avinoam Idan, from the Chaikin Center of Geostrategy & Center of Maritime Policy & Strategy at Haifa University in northern Israel, said his country should not be dragged into the turmoil stirred by up Turkey and praised the Israeli government for scrapping the idea to strike a pipeline deal with Ankara.

"Gas pipelines can only be laid when relations between the parties excel but this is not the case with Turkey".

"Unlike with oil, where all you have to do is to find an outlet along the coast and load the crude on tankers, laying gas pipelines is more complicated. Once you construct the pipeline, you cannot change it, so relations between the countries that participate in the construction should be stable for the project to succeed", Dr Idan said.

But apart from Ankara, Israel might face another challenge - this time from Russia.

Media reports suggest that Israel's gas, which expected to start reaching Europe in five to seven years from now will decrease the EU's dependency on Russia, who supplies some 40 percent of the EU's annual needs, and that might cause dissatisfaction in Moscow.

Idan, however, dismisses these allegations saying Israel is not in a position to compete with an energy giant. "Israel is expected to supply some ten percent of Europeans' demands for energy. This is simply not enough to beat such a superpower as Russia. While it will give the EU the possibility to diverse their resources, it will still not minimise their dependency on Moscow".

Tel Aviv doesn't want to see relations with the Kremlin hit a low ebb. The two have enjoyed strong economic, cultural, and military ties over the years, but those have deteriorated following Israel's involvement in the downing of a Russian military plane off Syria in 2018 and, more recently, after Russia jailed a young Israeli woman for alleged drug smuggling.

Energy as a Political Tool

Neither will Israel be able to use its gas to improve relations with Europe, which continue to worsen as a result of Israel's expansion policy in the West Bank, considered an occupation under international law.

In recent months, the EU has taken several measures to punish Israel for its so-called hawkish policies. These included the opening of a probe into Israel's alleged war crimes in Gaza, the marking of products originating in the West Bank and the Golan Heights, conquered by Israel in the 1967 Six-Day War, and the looming vote for the recognition of an independent Palestinian state.

But while Israel cannot use its gas as leverage on the international arena, Idan still believes the hydrocarbon will play a pivotal role in improving relations with neighbouring Jordan and Egypt.

"Egypt, which has liquefied natural gas (LNG) plans to import energy from Israel and Cyprus and re-export it on vessels to Europe, a move that will boost cooperation between the two states", the expert summed up.

According to estimates by Israel's Ministry of Energy, the country boasts reserves of roughly 21 trillion cubic feet of natural gas, enough to fulfill the Jewish state's power generation needs for the next 40 years while still leaving plenty of supply for export.