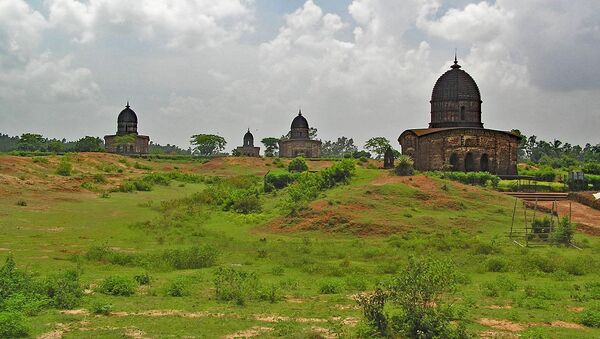 CC0 / /
Subscribe
International
India
Africa
New Delhi (Sputnik): The Indian state of West Bengal’s governor has stirred up a hornet’s nest after recalling the controversial Lord Curzon, a Viceroy of India under British rule who was responsible for partitioning Bengal. The partition separated the largely Muslim eastern areas from the largely Hindu western areas.

West Bengal Governor Jagdeep Dhankhar on Tuesday said he is sitting at the “iconic table” from which Lord George Curzon signed the Partition of Bengal in 1905 while recording a New Year message for people of the state.

Just as his comment started being observed by many as a politically insensitive remark, Governor Dhankhar clarified with an idiom saying: “Missing the wood for the trees”, meaning the people couldn’t understand him as they were too worried about the details.

Dhankhar, however, evoked a flurry of remarks on social media for his comment, with some netizens even saying that he is “glorifying the horrific incident of partition”.

You're missing the point of Bengal being one of the victims of partition and we would want you to NOT remind us of it, thank you very much! #IndiaRejectsNRC #IndiaAgainstCAA

The person siting on this table is humble servant of the sangh(british licker) mandated to uphold and destroy the Constitution and divide the people of State of West Bengal. How can we there be ‘cutting the wood for the trees'!

The table is not 'iconic' sir, it's rather haunted. The first partition of Bengal is a 'painful' memory for all of us. Happy New Year, dear sir.

Mr. Governor, this is not a case of "missing the wood for the trees". You are just glorifying the horrific incident of partition by saying the table "iconic" with the context of "signning the partition by Lord Curzon". Probably you don't know the pains of Bengalis for partition.

Sir, you think the table from where first bengal partition came into effect is "iconic". I want to remind you that Rabindranath Thakur built a movement and conducted "Rakhibandhan" to stop that partition and ultimately we, the Bengalis obliged Britishers to revoke it. Jay Hind.

Dhankar has been a controversial political figure in West Bengal. He was earlier shown black flags and greeted with "Go Back" slogans by students for supporting the Citizenship Amendment Act, seen as discriminatory against Muslim immigrants by critics.

Dhankar made reference to the West Bengal Partition of 1905 that was announced by Lord Curzon. The partition triggered riots in the state and massive protests ultimately leading to the revival of Indian National Congress from a middle-class pressure group into a nationwide mass movement.