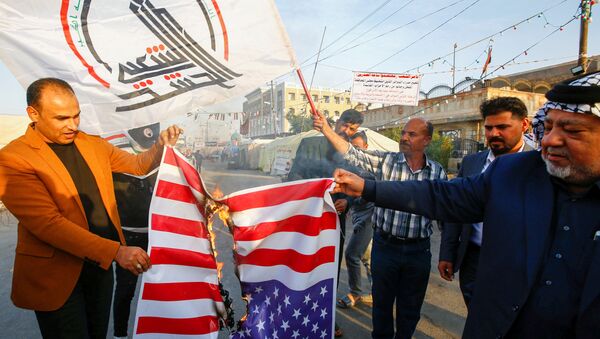 Subscribe
Tensions between Washington and Baghdad escalated after the American military carried out airstrikes targeting five facilities of the Kata'ib Hezbollah Shia militia group in Syria and Iraq.

Numerous Iraqi citizens have gathered outside the US Embassy in Baghdad's Green Zone, protesting against the latest airstrikes by the American military in the country.

According to reports, Iraqis, who earlier attended the funerals of those killed in the military strikes, are burning American flags and shouting "Down, down, USA" and "Death to America".

Preparing the tents for the sit-in outside the #US Embassy in Baghdad's Green Zone. #Iraq pic.twitter.com/rrl8yZlM9g

​Sunday's airstrikes have reportedly killed 25 militia members and left 51 others injured. The operation was a response to an attack on a US base near the northern Iraqi city of Kirkuk on Friday, however, no group claimed responsibility for the assault.

US President Donald Trump during a phone call with Iraqi Prime Minister Adel Abdul Mahdi underscored the need for the country to protect US personnel and facilities amid protests at the American Embassy in Baghdad, the White House said in a readout of a phone call on Tuesday.

"The attempt to break the American embassy in Baghdad is a violation of international protocols and agreements binding to the Iraqi government [...] Peaceful protest is a right guaranteed and protected by the constitution but attacking foreign missions is against its interest and international reputation", Salih said in the statement, cited by Reuters.

Spokesperson for the Ministry of Foreign Affairs of the Islamic Republic of Iran Seyyed Abbas Mousavi in a published statement "rejected accusations by American officials" against Iran, calling these "empty" and warning the White House against any further statements like this.

The ministry also called on Washington to reject its "destructive policies" in the Middle East.

The US State Department has said in a statement that American personnel in the embassy in Baghdad are secure and that there is no need for an evacuation.

"US personnel are secure and there has been no breach. There are no plans to evacuate Embassy Baghdad", the spokesman said.

16:37 GMT 31.12.2019
US Ambassador to Iraq is on Previously Scheduled Personal Travel and is Returning to Embassy

The spokesman pointed out that US Ambassador to Iraq Matthew Tueller was to return to the mission from a previously scheduled personal travel.

"Reports that he [Tueller] has been evacuated are false", the spokesman said.

The US Embassy in Baghdad was attacked by demonstrators reportedly shouting "death to America" following airstrikes by American forces in Iraq, The New York Times reported.

Iraqi PM Adil Abdul-Mahdi and President Barham Salih assured Secretary of State Mike Pompeo that the American diplomatic staff in the country will be protected after he stressed that Washington would "defend its people".

Protesters continue to attempt to break inside the US Embassy as American soldiers assigned to guard the diplomatic compound remain barricaded inside, according to media reports.

More than 20 people protesting against the US’ recent attacks on Iraqi Shia militant targets have been injured "by bullets and tear gas bombs" during mass rallies near the US Embassy, the Iraqi Popular Mobilisation Forces' press office said

Iraqi Prime Minister Adil Abdul-Mahdi has said in a statement that any aggression against embassies or foreign representations will be prevented and punished by law.

"We recall that any aggression or harassment of foreign embassies will be firmly prohibited by the security forces", Abdel Mahdi's office said, several hours after the strike began.

#Iraqi & #US Special Forces are in the main building of #US Embassy in #Baghdad now. They will open fire at any #IRGC terrorist (disguised as protester) if he tries to enter the building. pic.twitter.com/gloqCAU9bT

U.S armed forces inside the reception office of the U.S embassy in #Baghdad
Video by : PMF protesters pic.twitter.com/CTAwHwGcS6

VIDEO: Protesters set fire to the outside walls of the US Embassy in Baghdad. - @IRaqiRev pic.twitter.com/gWJC0d5a8D

Mourners marching in front of #US Embasdy in Baghdad and they have decided to setup protest tents there. They protest against US attacks on KH bases in Anbar #Iraq #PMF #KataibHezbollah pic.twitter.com/dv48YTBEkW

000000
Popular comments
I hope they will burn the US block to the ground and seek due revenge of an eye for an eye against these US thugs. This Iranian backed militia is part of the Iraqi coalition fighting the US sponsored ISIS terrorists. US fools.
amike
31 December 2019, 12:50 GMT16
000000
US out of the Middle East and out of Europe. They are a menace to the human race.
Tacitus
31 December 2019, 13:52 GMT11
000000
Newsfeed
0
New firstOld first
loader
LIVE
Заголовок открываемого материала
Access to the chat has been blocked for violating the rules . You will be able to participate again through:∞. If you do not agree with the blocking, please use the feedback form
The discussion is closed. You can participate in the discussion within 24 hours after the publication of the article.
To participate in the discussion
log in or register
loader
Chats
Заголовок открываемого материала
Worldwide
InternationalEnglishEnglishMundoEspañolSpanish
Europe
DeutschlandDeutschGermanFranceFrançaisFrenchΕλλάδαΕλληνικάGreekItaliaItalianoItalianČeská republikaČeštinaCzechPolskaPolskiPolishСрбиjаСрпскиSerbianLatvijaLatviešuLatvianLietuvaLietuviųLithuanianMoldovaMoldoveneascăMoldavianБеларусьБеларускiBelarusian
Transcaucasia
ԱրմենիաՀայերենArmenianАҧсныАҧсышәалаAbkhazХуссар ИрыстонИронауОssetianსაქართველოქართულიGeorgianAzərbaycanАzərbaycancaAzerbaijani
Middle East
Sputnik عربيArabicArabicTürkiyeTürkçeTurkishSputnik ایرانPersianPersianSputnik افغانستانDariDari
Central Asia
ҚазақстанҚазақ тіліKazakhКыргызстанКыргызчаKyrgyzOʻzbekistonЎзбекчаUzbekТоҷикистонТоҷикӣTajik
East & Southeast Asia
Việt NamTiếng ViệtVietnamese日本日本語Japanese中国中文Chinese
South America
BrasilPortuguêsPortuguese
NewsfeedBreaking
06:00 GMTKnow-How: Who Actually Made Scythian 'Gold'
05:59 GMTDenmark Bans Influencers From Advertising Cosmetic Surgery, Sugar Dating to Minors
05:51 GMTUK Convenes Urgent G7 Ministerial Meeting Over COVID Variant Omicron as WHO Urges Not to Panic
05:07 GMTMass Killer Breivik Sending Letters to Survivors With Excerpts From His Manifesto
04:47 GMTCOVID-19 Live Updates: Japan to Ban Travellers From Entering to Prevent Spread of Omicron Variant
03:46 GMTVideo: Jacksonville Jaguars Mascot Risks it All in Failed Stunt, Still Unable to Bring Luck to Team
03:39 GMTGOP Lawmaker Says Biden’s Social Spending Plan Would Allow IRS to 'Spy' on Americans
02:53 GMTMaduro Calls EU Observers at Latest Venezuelan Elections ‘Delegation of Spies’
02:43 GMT'Keep Livin': Matthew McConaughey Decides Not to Run for Texas Governor
02:36 GMTOver 2,000 People Protest Against COVID-19 Measures in Prague - Reports
02:19 GMT'French Trump' & Possible Presidential Candidate Zemmour Spotted Showing Middle Finger to Protester
01:28 GMTMarket Bull Expects US Fed to Raise Rates Six Times By 2024 Due to High Inflation
00:24 GMTRepublican Rep. Says Congress Leadership 'Needs to Change' as GOP Could Secure Southern Border
YesterdayFauci Tells Biden It Will Take 2 Weeks to Have Full Information on Omicron Strain
Yesterday‘Absolute Hubris’: Rand Paul Slams Fauci For Saying 'I Represent Science'
YesterdayRoger Stone Calls FBI 'Biden's Personal Gestapo' While Speaking of Jan. 6 Committee Subpoena
YesterdayJennifer Lopez Feels Her Reunion With Ben Affleck Is 'Truly Meant To Be,' Report Says
YesterdayUS Transport Sec Buttigieg Wriggles on Ridiculed 'Racist Roads' Comments
YesterdayNew Jersey School to Remove President Woodrow Wilson's Name Over Racism Legacy
YesterdayTrump's Super PAC to Hold Biggest Fundraiser Yet Amid Biden's Sinking Polls - Report