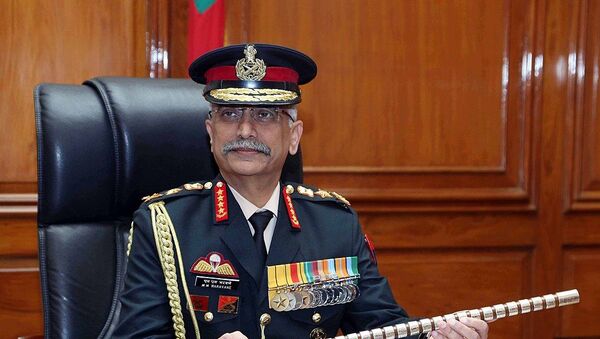 Commissioned into the seventh battalion, the Sikh Light Infantry Regiment in June 1980, the new army chief, General Manoj Mukund Naravane, has also commanded a force in Jammu and Kashmir.

​“It’s an honour to be given this responsibility", Naravane said while adding that he will have to deliberate on various challenges in the future.

Chief to Deal with China

After the Doklam stand-off in 2017, Naravane was in charge of implementing "strategic guidance" issued after the first informal summit in Wuhan in April 2018 to strengthen communication between the militaries of the two Asian giants to build trust and mutual understanding and enhance predictability in the management of border affairs.

Naravane had in the past publicly admitted that relations with China should not be assessed in a simple manner as they contain complexities.

In July 2019, Naravane said: "With every round of talks on the vexed LAC issue, the differences keep getting narrowed down. Hopefully, at some point, all interests will converge, and we will be able to sign an agreement formally".

At the same time, Naravane never concealed India’s ambition to counter Beijing along the loosely demarcated border measuring around 4,057 km. Naravane, 59, stated that India had raised concerns regarding the pace of infrastructure developments at the appropriate military, political, and diplomatic levels with China.

He also mentioned that “capability building along the northern borders, both in terms of infrastructure development and force modernisation, remains the key tenet of all our endeavours, and is an ongoing effort”.

Naravane served for three years as a defence attache at the Indian Embassy in Myanmar and also looked after the Assam Rifles, responsible for securing the Myanmar border and insurgents in the northeastern parts of country.

Under his leadership, India conducted a major cross border operation in Myanmar against insurgents wherein the two armies destroyed dozens of insurgent camps located inside Myanmar.

General Naravane is taking over the post of army chief at a time when relations between the two nuclear armed nations are at their lowest due to two major events in 2019, the Balakot airstrike and revocation of the disputed Kashmir region's special status.

Naravane tackled a similar situation in 2016 as chief of 2 Strike Corps along the western border after a series of terror strikes hit Indian military camps in Kashmir.

The Ambala-based command is a heavily mechanised force with artillery, engineer, and air defence brigades. It is expected that under Naravane's stewardship, India will expedite its offensive strategies (Integrated Battle Groups).

Elephant in the Room

But Naravane’s vision will face major challenges as the budget has been tightened. This also comes againt the backdrop of a slumping economy in India.

The army had put in a request of around $5.2 billion in 2019-20 but the government allotted only $3.2 billion for modernisation. The infantry has been the worst hit in terms of this shortfall.

The military has even been forced to slash its requirement for 5719 new-generation sniper rifles by two-thirds to just about 1,800 guns and several crucial procurements have been delayed because the Finance Ministry did not allocate the required amount to the army.