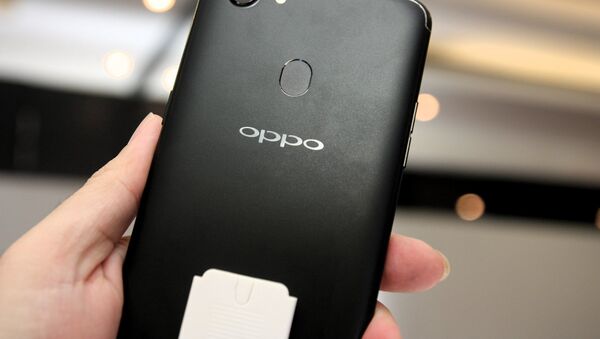 CC BY-SA 2.0 / Cheon Fong Liew / OPPO F5 in Malaysia
Subscribe
New Delhi (Sputnik): In recent years, India has replaced the US and Vietnam to become the second largest market and manufacturer of smartphones after China.

Realising the potential of India’s massive market, Chinese handset maker OPPO reportedly aims to produce 100 million devices in India and aggressively expand its retail presence in the country in 2020.

The brand captured 11.8 percent of India’s total smartphone market share in the third quarter, July-September, in 2019.

Amid a simmering US-China trade war, the year 2019 witnessed major smartphone players shifting their focus to India in both ways – sale and manufacture.

In September, California-based Apple announced hefty investments of $1 billion and $13 million to facilitate iPhone production and boost the brand’s retail expansion in India.

In November 2019, India-produced iPhones hit the shelves in national as well as global markets.

At the time, Indian Telecom Minister Ravi Shankar Prasad revealed that the country was expected to export $1.6 billion worth of mobile phones and components in 2019, confirmation to which is yet to come.

​Earlier in December, South-Korean tech giant Samsung announced that India had managed to churn out $10 billion in revenue for the company despite a drop in brand sales and the ongoing economic slump in the country that has resulted in the nation’s slowest financial growth in six years.

Samsung inaugurated the world’s largest mobile factory in India’s Noida city back in 2019, aiming to almost double its production from 68 million units to 120 million units annually.

In fact, the sub-brand Motorola of Hong Kong-based tech player Lenovo recently launched its first foldable smartphone in the US for $1,500 (Rs. 106,000 approx.). The smartphone, called “Motorola Razr”, is actually “Made in India”.

By 2022, smartphone manufacturing in India is expected to see $6.2 billion worth of investment.

Component manufacturing brands like US-based Foxconn and Finland-headquartered Salcomp, which plans to invest $281.6 million within the next five years in India, also evidently trust the potential of the Indian market as well as the trend of “Make in India”.

In line with Prime Minister Narendra Modi’s vision of making India a $5 trillion economy by 2025, the “Make in India” initiative launched in 2014 by the Indian government aims to encourage companies to manufacture and assemble their products in India.