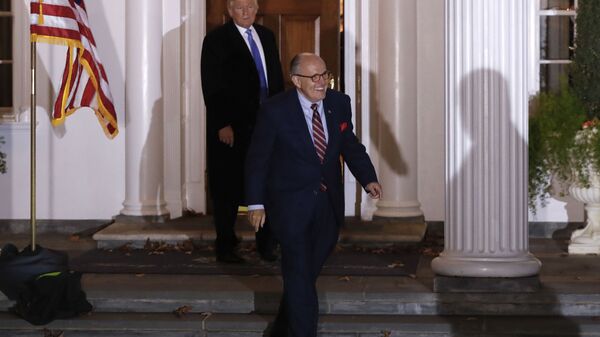 The call made in September 2018 was part of a “shadow diplomatic effort”, backed in part by private interests, aimed at engineering a negotiated exit to “ease President Maduro from power” and “reopen Venezuela to business”, sources familiar with the matter told the Washington Post. The outlet didn’t specify who was the initiator of the call.

As Sessions had reportedly served as an emissary in the back-channel diplomatic effort, visiting Maduro in Caracas that spring, the phone call, which Giuliani joined, was a follow-up to that visit, Sessions’ spokesman Matt Mackowiak told the Post.

Giuliani was introduced at the beginning of the call but appeared mostly to listen as Maduro and Sessions spoke, Mackowiak said. A former senior administration official told the Post that at that time no one knew why Giuliani was involved in the call, “causing confusion”.

The call was reportedly at odds with the White House’s official policy, which, under then-national security adviser John Bolton, was aimed at ratcheting up sanctions and taking a harder stance against the Venezuelan government. Two people familiar with the matter told the Post that around the time of the phone call Giuliani met with Bolton to discuss the off-the-books plan – a plan which was rejected. It is unclear whether Giuliani speaking to Maduro was authorized by the White House or US President Trump.

Sessions, who lost his seat that November and is now running for Congress in another Texas district, said through his spokesman that he has known Giuliani for three decades but has never worked with him on any private-sector activities.

Since January, Venezuela has been struck by mass protests following the inauguration of President Nicolas Maduro. On 23 January, head of the opposition-controlled National Assembly Juan Guaido illegally proclaimed himself interim president of the country. He was immediately backed by the US, followed by a number of Western states. Maduro, who was backed by Russia, China, Turkey, and a number of other countries as the legitimate president, called the 36-year-old politician a “US puppet”.

In addition to political pressure, the US has also continued to exercise economic pressure on Venezuela by introducing successive packages of sanctions against the country and its oil-related activities. Then-US national security advisor John Bolton repeatedly said that "all options are on the table" when referring to the debates about possible US military intervention in Venezuela.

Guaido has failed to receive widespread support from the public, with the attempted April military coup against Maduro failing. The Maduro administration also launched an investigation into foreign interference on behalf of Guaido and the latter’s potential influence-peddling among opposition politicians, banning him from leaving the country.