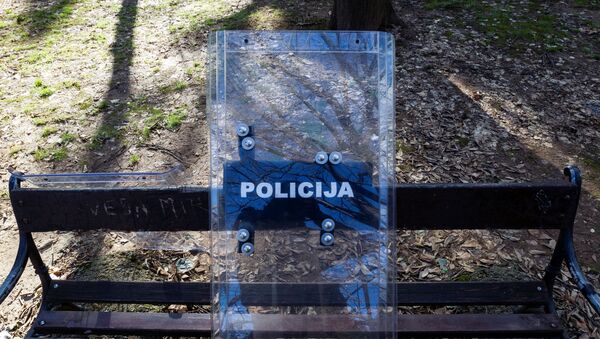 BELGRADE (Sputnik) - Clashes between law enforcement and protesters in the Montenegrin capital of Podgorica over a controversial law on religious communities have left four officers injured, the country's Police Administration said on Monday.

According to the statement, protesters tumbled down a massive pine tree to block the highway to the airport of Podgorica and began throwing stones at police officers who arrived at the scene to unblock the road.

"A rapid police intervention broke the blockade on the highway to Podgorica airport and the traffic was restored. Four officers sustained injuries in the course of the operation", law enforcement officials said on Twitter.

One of the injured policemen, Dalibor Zhivkovic, was reportedly taken to a hospital with head injuries.

Priests of the Serbian Orthodox Church and several thousand believers from the municipality of Herceg Novi blocked the road and read prayers in front of NATO Montenegro police.

"Milo, you thief, We don't give you our shrines" pic.twitter.com/qLEkb8KzuJ

Protests against the controversial law began in multiple cities across Montenegro on Sunday, with the epicenter in Podgorica's suburbs. Both police and protesters are apparently on the brink of getting excessively violent as video footage from near Podgorica's Church of Resurrection shows law enforcement trying to break in during an evening service, while footage from the city's northern suburb of Zeta shows protesters throwing firecrackers at police.

Ugly scenes tonight from Podgorica, Montenegro’s capital, as Serb nationalists continue to clash with police over the recent passage of a Religious Freedom Law. https://t.co/YvUEx9BM90

On Saturday, Montenegrin President Milo Djukanovic signed into law a bill that envisages nationalizing property of religious entities should they fail to prove the right to ownership before 1918, the year when Montenegro ceased being independent. The Serbian Orthodox Church (SOC), which is followed by the overwhelming majority of Montenegro's predominantly Orthodox Christian population, fears the government will seize its assets, such as ancient monasteries and temples, and give them to the noncanonical Montenegrin Orthodox Church — all to weaken the SOC's influence in the country.