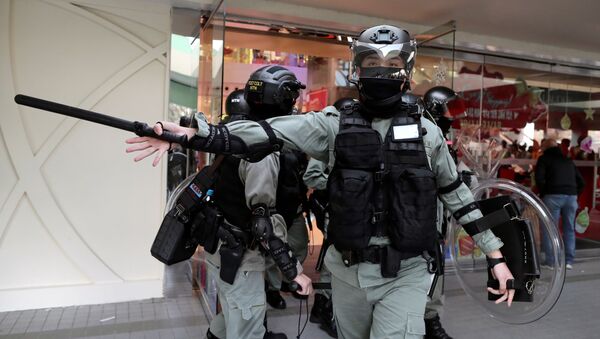 Anti-government demonstrators plotting to disrupt Hong Kong’s New Year’s Eve and New Year’s Day celebrations with violence or other crimes will be met by more than 6,000 members of the semi-autonomous city’s police force, ranging from undercover cops to riot police.

After seven months, demonstrations have transformed from the initial protest of the government’s proposed extradition bill to a movement grounded five central demands and plagued by violence, arrests and even death.

This unrest by radical demonstrators is expected to spill over into 2020, as more peaceful protests have been approved by authorities for January 1.

“On New Year’s Day, we need to show our solidarity ... to resist the government. We hope Hong Kong people will come onto the streets for Hong Kong’s future,” said Jimmy Sham, a leader of the organizing group Civil Human Rights Front, as reported by Reuters.

Sham’s group, which organized a peaceful mass march with a reported 800,000 attendees in early December, is expected to conduct their “pro-democracy” march from Causeway Bay to Hong Kong’s central business district.

The South China Morning Post cited law enforcement sources in estimating that more than 6,000 officers will be deployed around the semi-autonomous city to arrest those who break the law.

An officer who spoke with the outlet noted that police will be taking a more aggressive approach against violent demonstrators than they did during the Christmas holiday last week.

“Plain-clothes officers posing as shoppers will carry out surveillance in shopping centers. Detectives will swoop into action when protesters start gathering,” he said. “Riot police will be called in if they refuse to disperse or leave.”

The police force has been following anti-government social media posts leading up to this moment and predict violent demonstrators will strike shopping malls such as Times Square in Causeway Bay and Tsim Sha Tsui’s Elements and Harbour City shopping malls on New Year’s Eve - the latter of which was the site of police-protester clashes on Christmas Eve.

Demonstrators are also expected to make a return to the Prince Edward Mass Transit Railway station in Mong Kok to hold a rally marking four months since the August 31 storming of the station by the Hong Kong Police Force’s Special Tactical Unit.

The officers, known also as “raptors,” received immediate backlash from anti-government protesters who accused the police force of brutality and alleged they and the government were attempting to cover up the number of individuals injured during the operation. Amnesty International also accused raptor squad members of excessive force in a September release of a field investigation on the protests.

Nearly 6,500 individuals have been arrested over the past seven months of demonstrations, according to Hong Kong police.

The coming demonstrations are slated to occur alongside Hong Kong’s revamped New Year’s Eve celebration. While the city usually has a fireworks display on December 31 over Victoria Harbor, the Hong Kong Tourism Board announced on December 18 that, for the first time in a decade, there will instead be a "Symphony of Lights” show, complete with pyrotechnics.

“Many Hong Kong people are fed up with this violence. If you use violence, you will not get public support,” he said. “We, [the] police, will do all we can to arrest you … We will step up our efforts and citizens should refrain from breaking the law.”