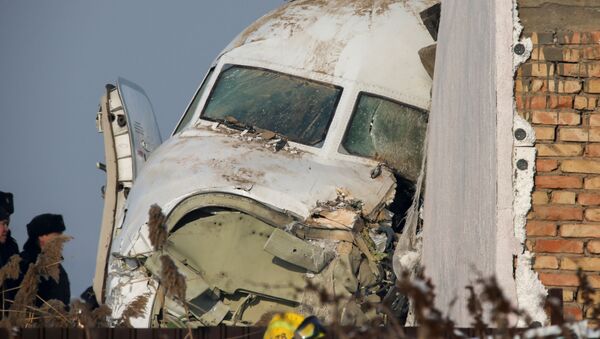 ALMATY (Sputnik) - The flight recorders of the plane that crashed near Kazakhstan's largest city of Almaty have been transferred to the Moscow-based Interstate Aviation Committee for decryption, with the preliminary results expected by January 10, Kazakh Deputy Prime Minister Roman Sklyar said on Monday.

"The flight recorders were handed over to the Interstate Aviation Committee yesterday; our specialists themselves delivered them. Three flight recorders are in good condition, thus we hope that there will be no problems with their deciphering," Sklyar told reporters in Nur-Sultan.

According to the deputy prime minister, the decryption will take place during the New Year holidays.

"The Interstate Aviation Committee promised that they will work during the holidays, give the transcripts, and we will announce preliminary results of the investigation by January 10," Sklyar added.

The Kazakh authorities consider technical malfunction or a pilot mistake among the possible causes of the tragedy.

The Bek Air airline's Fokker 100 plane, heading to the Kazakh capital of Nur-Sultan with almost 100 people aboard, crashed on Friday soon after take-off. It lost altitude, broke through a concrete fence and hit an empty two-story building. Twelve people were killed in the crash.