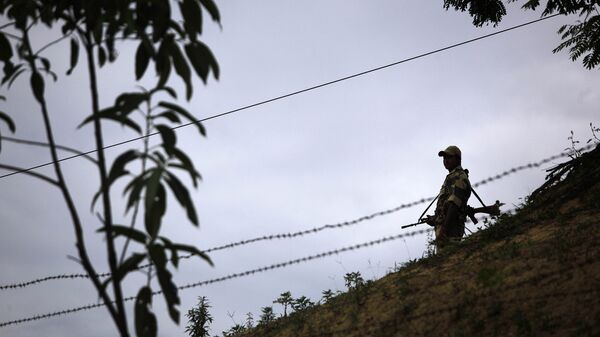 New Delhi (Sputnik): Indian Home Minister Amit Shah had claimed the country's northeastern region would not be affected by the new citizenship law as most of the states fall under the Inner Line Permit (ILP) policy - preventing access to the state with official permission - of the Indian government. Tripura, too, falls under its purview.

Amid a furore over the Indian government’s decision to grant citizenship to persecuted non-Muslim minorities from Bangladesh, Afghanistan and Pakistan, a video has surfaced on Twitter showing immigrants from neighbouring Bangladesh crossing into the Indian state of Tripura.

Hello India,this is how porous our borders are.These Bangladeshi's are crossing over. Location Tripura,Simna, India at Daldali village. Do you think your ILP will stop them?
26th Dec:5 p.m.
The lang,dress,features does not distinguish if they belong to 1 religion or another. pic.twitter.com/g8oUqASPR9

​The video holds importance because the state falls under the ILP policy – where even an Indian citizen requires a document from the state government to visit the state for a limited period of time.

The video has been shared by Pradyot Manikya, Chairman of The Indigenous Progressive Regional Alliance (TIPRA), a social organisation, claiming that the crossover took place in in the vilage of Daldali in the northeastern state. He also questioned the efficiency of the policy in stopping immigrants from entering the state.

The controversial citizenship law has sparked nationwide protests with people and opposition parties terming it discriminatory towards Muslims. The protests resulted in the deaths of 22 people, leaving over 50 security officers and thousands of people injured.

The protests started in the northeastern region of the country, where residents claimed that the granting of citizenship to migrants, especially from Bangladesh would reduce them to a minority in their own states.