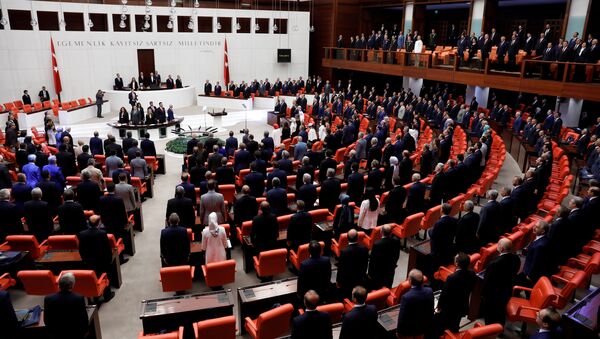 MOSCOW (Sputnik) - The Turkish government’s request for using the country’s armed forces in Libya is likely to be submitted to the parliament on Monday, media reported on Saturday.

Turkish President Recep Tayyip Erdogan previously expressed hope that the lawmakers would approve the mandate for Libya between 7-8 January.

According to the sources from Turkey's ruling Justice and Development Party (AKP), cited by the Anadolu news agency, the draft law will be submitted to the parliament on 30 December, while lawmakers will debate on it on 2 January.

The final agenda for parliamentary meetings will be agreed on Monday.

Earlier this week, the Anadolu news agency reported, citing National Defence Ministry, that the Turkish Armed Forces were ready to be deployed to Libya if necessary.

Last month, Ankara and the UN-recognised Libyan Government of National Accord (GNA) signed an agreement on military cooperation.

Libya has been split into two parts between the rival administrations since the North African country’s longtime ruler, Muammar Gaddafi, was killed in 2011.