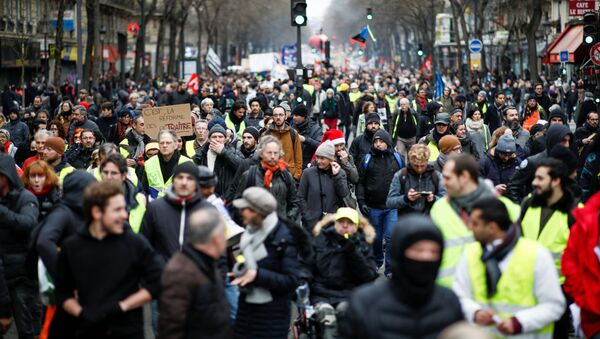 MOSCOW (Sputnik) - Paris police said they had detained three people amid the violent protests in the capital on Saturday.

"Paris police carried out 3 arrests for projectile throwing against the law enforcement officers during the protests," the police wrote on Twitter.

Two protests were held in Paris on Saturday, namely rallies by yellow vests and opponents of the pension reforms. Police used tear gas several times during the day. One case of tear gas deployment was provoked by radicals, who threw stones at police officers and burned down garbage bins.

The nationwide strike began in early December in response to the government's plans to replace 42 different pension schemes with a universal, points-based system. The decision has angered many public service employees.