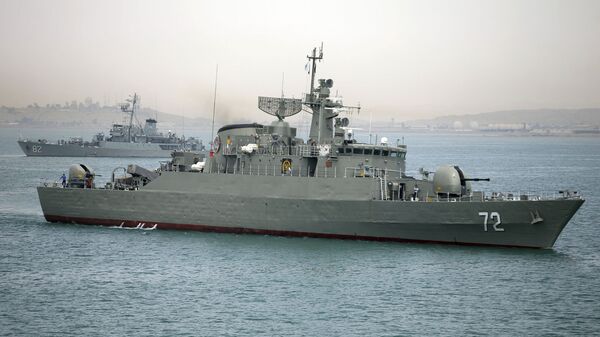 TEHRAN (Sputnik) - Any spying aircraft spotted in the area of joint drills of Iran, Russia, China will be destroyed, the Coordinating Deputy of the Islamic Republic of Iran Army, Habibollah Sayyari, told Tasnim news agency on Saturday.

"Many countries are definitely seeking to know what the matter is. Spies have also taken action. A joint war game is no joke, and this is no joking matter for us either. We will hit whatever spying craft in the war game zone, be it watercraft or aircraft, as we have proved having such a capability in the past," he said.

"The naval drills of Iran, Russia and China in the northern Indian Ocean are definitely not the last," he said.

Russia, Iran and China launched a joint naval exercise, dubbed Naval Security Belt, in the northern Indian Ocean and the Gulf of Oman earlier in the day. During the exercise, participants are set to engage in drills fighting terrorism and piracy, as well as providing regional security.

The drill will last four days and will include the three states sharing the experience of naval rescue operations.

Earlier, the Pentagon, which has announced its own ‘maritime security’ operation in the region, confirmed that it was aware of the drills and would be closely monitoring the situation.