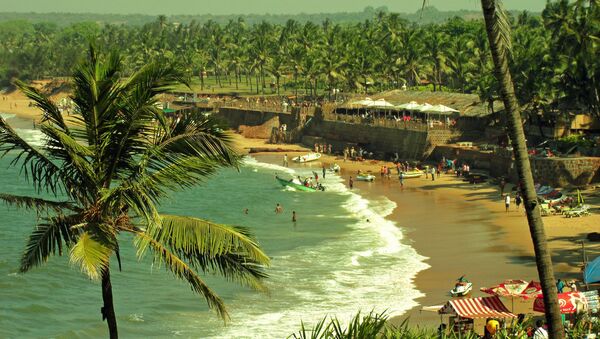 New Delhi (Sputnik): Sunburn, Asia’s biggest electronic dance music festival (EDM) and third-largest dance festival in the world after Tomorrowland and Ultra, has often been criticised for the popularity of illicit substances at the event.

Two visitors from the Indian state of Andhra Pradesh died in the seaside resort of Vagator in North Goa on Friday evening after reportedly complaining about feeling uneasy following an alleged drug overdose, according to North Goa police. The men collapsed within minutes of each other while waiting to enter the ongoing Sunburn music festival and were rushed to the hospital.

“Both were rushed to a nearby hospital, but were declared dead on arrival,” North Goa District Police Superintendent Utkrisht Prasoon told reporters.

Acid, ecstasy, cocaine, hashish (known as charas), marijuana and most other forms of drugs are illegal in India, but they're still widely available in Goa, according to The Lonely Planet, where they fuel the Electronic Dance Music (EDM) parties that have made the former Portuguese colony one of the nation's top tourist destinations, especially among twentysomethings.

Dancing there hasn't always been safe. In 2009, a 23-year-old girl died at the festival after overdosing on PCP. In 2013, around 450 bottles of Ketamine were found at the festival venue. The Deccan Herald reports that in 2014, a Mumbai-based fashion designer died following an alleged drug overdose at another EDM festival in Goa. In a similar event to the most recent one, two young EDM festivalgoers died of an overdose in Goa in 2017.

The Opposition in the local legislature wants the party to end. The Times of India reported on 15 December that the Congress Party addressed letter to Goa's Chief Minister Pramod Sawant of the ruling BJP party, urging him to prevent the sale of drugs at music festivals and EDM parties to be held in the state in the last week of December and ban the entry of minors. Unsurprisingly, they also complained about the noise. Perhaps equally unsurprisingly, their complaints have fallen on deaf ears.

Tickets to Sunburn aren't cheap, costing more than 9,000 rupees ($125) for the three-day event in a country where the average salary is about $300. The revenue windfall this tourism has brought the state has prompted authorities to look the other way; local cops will often demand a small bribe when it comes to narcotics, according to the Lonely Planet website, but even this has been discouraged.

Sunburn has attracted guests from more than 52 countries, helping make 'Goa' synonymous with trance music among EDM fans all over the world. According to a concert website, "Recent lineups have included dance royalty such as Martin Garrix, Afrojack, Dimitri Vegas & Like Mike and many more, who all played out underneath Sunburn's iconic stage production, visuals and pyrotechnics."