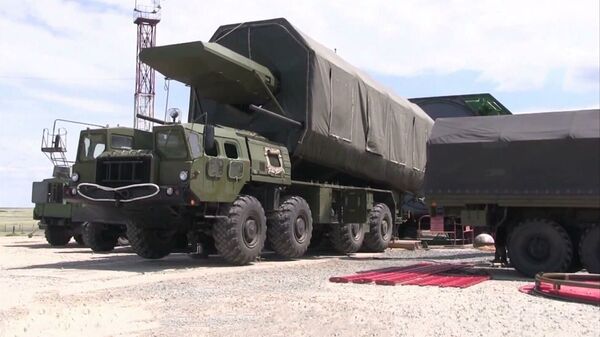 Ilya Tsukanov
All materialsWrite to the author
The Avangard is one of half-a-dozen new defence systems unveiled by Moscow in early 2018 as a means of restoring the global strategic nuclear balance amid NATO efforts to press up against Russia’s borders and create elements of a ground-based missile shield in Romania and Poland.

“I would like to congratulate every one of us and especially the Strategic Missile Forces. Today, at 10:00 am, the Avangard strategic missile has been put on combat duty. On behalf of all of us, I congratulate everyone with this significant event for our country and for its armed forces,” Shoigu said, speaking in a conference call with President Vladimir Putin on Friday.

What We Know About the Avangard

Tracing its origins back to US President Ronald Reagan’s ‘Star Wars’ space-based laser missile defence concept, the Avangard is based around a radically advanced Scramjet engine design, which enables the system to deliver both nuclear and conventional payloads at speeds of up to Mach 20.

Capable of manoeuvring while in flight, the system is essentially invulnerable to any existing or prospective missile defence system. This makes it an important element of Russia’s strategic deterrent, guaranteeing a Russian response in the event of aggression against the country.

The Avangard is presently believed to be carried into orbit aboard the R-36M2 intercontinental ballistic missile, although the strategic nuclear forces’ modernisation efforts mean that it will soon be replaced by the RS-28 Sarmat, a new class of missile capable of carrying up to 10 multiple independently targetable reentry vehicles (MIRVs) into orbit, from where they separate and proceed to their targets.

Last month, the Russian Defence Ministry announced that US inspectors had been allowed to see Russia’s Avangard system, with the goodwill gesture carried out under the auspices of the New START arms reduction treaty, to help ensure the agreement’s continued “viability and effectiveness”.

New START was signed between Russia and the US in 2010, and is set to expire in 2021 unless it is renewed for another ten-year period. Russian officials have repeatedly expressed their interest in renewing the treaty, with President Putin recently saying Moscow would be ready to extend the treaty “tomorrow, if necessary”. After the US’s unilateral decision to withdraw from the Intermediate-Range Nuclear Forces Treaty earlier this year, New START is now the last major arms control treaty between Russia and the US, capping both sides’ allowed deployed nuclear warheads to 1,550 apiece.

The US has yet to field its first hypersonic nuclear weapons, and is believed to have as many as nine separate programmes dedicated to this task. Last month, US Air Force Gen. Arnold Bunch Jr said he expects the country’s two main prospective hypersonic systems – the Hypersonic Conventional Strike Weapon (HCSW) and the Air-Launched Rapid Response Weapon (ARRW) to become combat-ready by 2022.