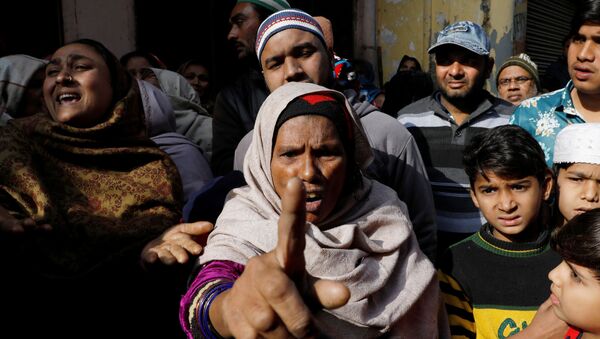 New Delhi (Sputnik): India’s Uttar Pradesh State has witnessed the highest number of violent incidents during the recent protests against the controversial Citizenship Law. Reports indicate the state ranked the highest for casualties with 19 deaths during violent protests and 288 state police personnel injured.

As police fear another round of protests on Friday after prayers in Mosques, it has reimposed restrictions in many sensitive areas and deployed additional security, according to P.V. Ramasastry, Uttar Pradesh’s Additional Director General (Law and Order).

Even as the state government was grappling with the situation, several videos have surfaced on social media, which shows police personnel smashing CCTV camera in Meerut city, 90 kilometres east of India’s national capital Delhi, to hide their highhandedness.

Here's another CCTV video from Uttar Pradesh's Meerut, near to where the violence that killed the five men on Dec. 20 took place, showing police hitting a CCTV camera at a shop on that street. #CAA2019 #India #protests pic.twitter.com/gArE5OdvaR

The controversial Citizenship Amendment Act 2019 seeks to grant citizenship to illegal immigrants from six religious minorities – Hindus, Parsis, Jains, Christians, Buddhists and Sikhs from Pakistan, Bangladesh and Afghanistan, if they arrived in India before 1 January 2015. But it explicitly excludes this privilege to Muslims from these countries, which the antagonists of the law term as discriminatory and against the Constitution of India.