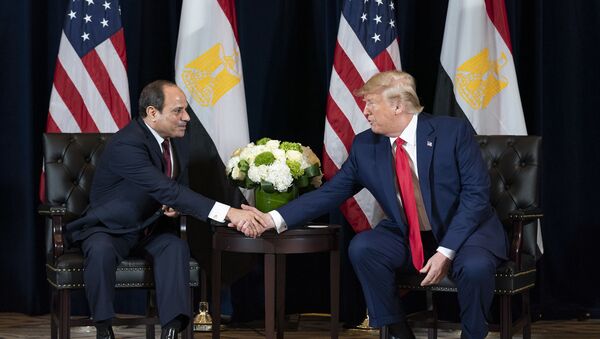 US President Donald Trump and Egyptian President Abdel Fattah al-Sisi agreed during a Thursday phone that they reject “foreign exploitation” in Libya and that the involved parties must take “urgent steps” to resolve the conflict, according to the White House.

"Regarding Libya, the leaders rejected foreign exploitation and agreed that parties must take urgent steps to resolve the conflict before Libyans lose control to foreign actors," the White House statement reads.

Libya has been split between two rival governments since 2011 when its long-time leader Muammar Gaddafi was overthrown and killed, with Khalifa Haftar's Libyan National Army (LNA) controlling the east and the Government of National Accord (GNA) controlling the country's west.

A day prior, Turkish President Tayyip Erdogan stated that Ankara is still ready to consider the possibility of sending troops to Libya if the GNA makes such a request. Erdogan's statement came after the Turkish parliament ratified an agreement on military cooperation with Libya's Tripoli-based government.

In recent weeks, the conflict in Libya has escalated after LNA’s commander announced an offensive on the GNA-held capital of Tripoli. During a similar conflict in April, hundreds of people were killed and thousands of others injured. Turkey has repeatedly promised to stand by the GNA.