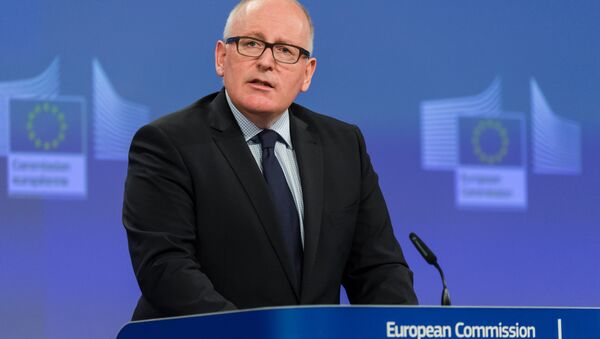 Since the 2016 Brexit referendum, relations and negotiations between the UK and the EU have seen all kinds of warnings, calls, and statements made. European Commission President Ursula von der Leyen’s deputy, Frans Timmermans, made his address, published right after Christmas, almost personal.

The European Commission’s executive vice president, Frans Timmermans, has published a sentimental love letter, as he described it, in The Guardian. He shared his feelings about the UK, which is set to leave the EU within months. In his address, he compared himself with an “old lover” of Britain and shared his feelings about its departure and bumpy relations, recalling how “their romance” had developed.

The EU official reminisced about the early days of the UK in the bloc, after London joined the European Economic Community, when Timmermans was in a British school in Europe. This was when his love for the country’s culture grew, and as years passed, “Britain was always there”.

“I know you now. And I love you. For who you are and what you gave me. I’m like an old lover. I know your strengths and weaknesses. I know you can be generous but also miserly. I know you believe yourself to be unique and different. And of course you are in many ways, but perhaps less than you think”, Timmermans’s message reads.

He did not stop at this, however. In his letter, he also spoke about London distancing itself from the EU, noting that the UK “will never stop referring to the rest of us as ‘the continent’”, which helps “to create the distance you think you need”, but also prevents it “from seeing that we all need a bit of distance between us”.

“All European nations are unique. Our differences are a source of admiration, surprise, discomfort, misunderstanding, ridicule, caricature and, yes, love”, he concluded, adding that “these differences make us the most creative, productive, peaceful and prosperous of families”.

Nevertheless, he warned that these peculiarities were being used against this bond, as well. According to the EC vice president, sometimes such differences are “manipulated to instil fear, to propagate superiority, to set one family member against the other”.

“Things then quickly get out of hand. We all are also very, very good at that. That is our legacy. That too is who we are. And as a family we have a duty to promote the best of times and keep the worst of times at bay. So far, for all its faults, the EU has been the most successful tool to achieve that goal”, he noted, lamenting that the UK decided to leave this marriage/family anyway.

He acknowledged that London was “in two minds about it”, just like it had felt about the EU before their “uncoupling”. Timmermans noted that this attitude served the UK well and “kept all of us in better shape”, voicing doubt whether it was necessary “to force the issue”.

“And the sad thing is, I see it is hurting you. Because the two minds will still be there, even after you have left. In the process so much unnecessary damage has been done to you, and all of us. And I fear more will follow”, he concluded, also complaining that he “felt deeply hurt when you decided to leave” at the referendum, pushed by former Prime Minister David Cameron.

He noted that he is “just sad that a member of our family wants to sever our ties”, but also optimistically suggested that such a bond “can never really be severed”, inviting the UK to reconsider its decision.

“We’re not going away and you will always be welcome to come back”, he wrote at the end of his sentimental message.

No-Deal Brexit ‘Unlikely’ Despite EU Discord – Academic
Following months of deadlock, as former Prime Minister Theresa May failed to get approval for her Brexit deal in the Parliament, her successor Boris Johnson recently promised voters a prompt withdrawal from the European bloc “without delay”. The Conservative leader, whose party gritted out a major win at the 12 December snap vote, pledged that the final version of the trade deal is due to be negotiated right after the Christmas festivities, as the EU and Britain are set to agree on the length of the post-Brexit transition period.