'Not Enough': Putin Sheds Light on How Many Hours a Day He has Slept Recently 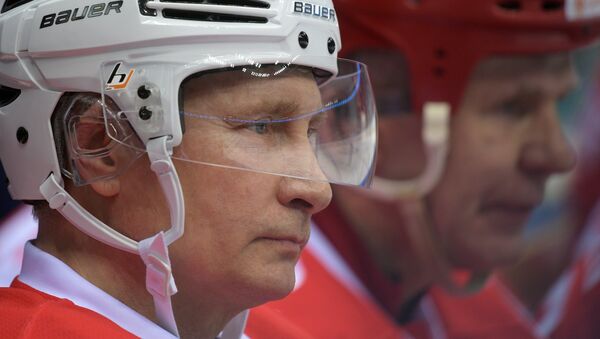 The Russian president, who is a well-known ice hockey fan, took part in a match with the Night Hockey League on Red Square this Wednesday, where he revealed some personal details about his daily routine of late.

Russian President Vladimir Putin said that he managed to sleep for only four to five hours lately, which was not “enough” for him, according to a broadcast on the Russia-24 tv Channel. The remarks were made during a break in the Night Hockey League match which took place on Red Square on 25 December and featured Vladimir Putin playing alongside the country’s Defence Minister Sergey Shoigu and some legendary Russian hockey players.

“I did not get enough sleep in the last week. I slept little – four-five hours. Not enough”, the president told Russian businessman Gennady Timchenko, playing for the opposing team, when he pointed out that it was important to devote time to training.

​Tweet: Timchenko: [We] still need to devote time to training. Putin: I did not get enough sleep in the last week. I slept little – four-five hours.

In the gala match, Putin, Shoigu and Russian hockey stars Pavel Bure, Valeri Kamensky, Sergei Fedorov and Alexei Kasatonov, played against the Moscow region governor Andrey Vorobyov, governor of Tula region Alexey Dyumin, Timchenko and some of the country’s well-known businessmen and public figures. The game ended with 8 to 5 score in favour of Putin’s team.

Russia’s Ex-Finance Minister Reveals How Putin Saved the Country’s Economy
It was not the first time the Russian president openly discussed his sleeping habits. In April, Putin stated that despite his tense schedule during his visit to Russia's Vladivostok and China, he still managed to sleep 5,5 to 6 hours per day which he sees as a sufficient amount of time.

Vladimir Putin has been an outspoken supporter of so-called “hockey diplomacy”, praising the “trust” it potentially creates between players. He previously hit the ice with Belarus’s President Alexander Lukashenko and his Finnish counterpart Sauli Niinisto, and also remarkably scored eight goals in the recent gala match with the Night Hockey League held in Sochi this May.