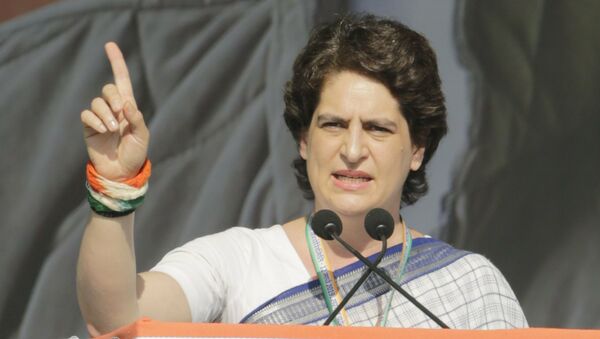 New Delhi (Sputnik): The remark came as Rahul and Priyanka Gandhi were stopped by police from entering Meerut, a city in Uttar Pradesh state on Tuesday. Both were heading to Meerut to meet families of those killed in violence during protests against the Citizenship Amendment Act.

Amid ongoing protests against India’s Citizen Amendment Act (CAA) and opposition political parties hitting the streets in support of the demonstrators, a state lawmaker from the Indian state of Haryana has described former Congress party chief Rahul Gandhi and his politician sister Priyanka as "petrol bombs".

Addressing the press on Tuesday, Haryana minister Anil Vij has stated that both the Gandhis ignite fire over the prevailing issues wherever they go. “Rahul Gandhi and Priyanka Gandhi are live petrol bombs. Wherever they go, they try to ignite fire. The countrymen should remain alert from them.”

Beware of @priyankagandhi and @RahulGandhi as they are live Petrol Bombs where ever they go they ignite fire and cause loss to Public Property.

In the last few weeks, thousands of students and political leaders have come out on the streets in several parts of India to oppose a new law that grants citizenship to non-Muslim immigrants from three neighbouring countries.

The CAA grants citizenship to illegal immigrants from six religious minorities – Hindus, Parsis, Jains, Christians, Buddhists and Sikhs from Afghanistan, Bangladesh and Pakistan if they arrived in India prior to 2015, but explicitly excludes Muslims with the same circumstances.

There are, however, also many supporters of the Act who have taken to the streets claiming the Central Government’s move would be good for persecuted people from neighbouring countries.

Indian Home Minister Amit Shah, however, has clarified that no citizen of India has anything to fear from the new law.