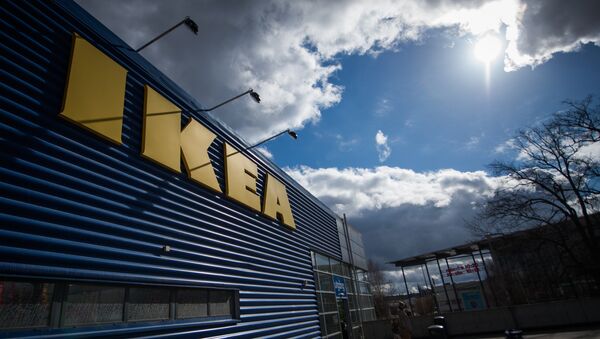 © AFP 2022 / JONATHAN NACKSTRAND
Subscribe
According to the Swedish furniture giant, immigration should be addressed not only by the governments but by the private sector and civil society as well. Meanwhile, Sweden, which has taken hundreds of thousands of immigrants in recent years, has been struggling to employ all of them.

The aim of the initiative presented at the UNHCR's first Global Refugee Forum in Geneva is for as many refugees as possible to start working and providing for themselves.

According to Ikea, immigration is not just a task for the governments, but also for the private sector and civil society.

"This is not just a matter for governments. The private sector and civil society also need to help refugees integrate, get to work and be able to contribute positively to the communities where they live", Per Heggenes, Ikea Foundation CEO and former spokesperson of the late Ikea founder Ingvar Kamprad told Dagens Industri.

According to Heggenes, this money will be spent over the next five years to fund various programs and make refugees self-sufficient.

"We want to help change the story of refugees. It often tends to focus on problems, while we know that they are hard-working people and we want to help them become part of society", CEO of Ikea Foundation Per Heggenes told Dagens Industri.

While the Ikea Foundation does not run its own projects, it has addressed refugee issues by funding various endeavours during the ten years that the foundation has existed. In addition to its recent billion-kronor pledge, the Ikea Foundation also collaborates on the refugee issue with Inter Ikea, which owns the Ikea brand and develops its portfolio with Ikea's twelve franchisees, and the Ingka Group, which runs the majority of the world's Ikea department stores, and a collaboration Per Heggenes describes as "unique in the Ikeasphere".

In concrete terms, it means Ikea department stores in some 30 countries will take on 2,500 refugees and give them job and language training, to increase their chances of employment with either Ikea or other companies.

"It started as local initiatives by dedicated staff during the refugee crisis to help refugees in different countries, and so far, about 500 people have received job and language training for an average of six months. Now we are expanding it to all our 30 countries and around 300 department stores to make more refugees employable", Tolga Öncu, head of department store operations within the Ingka Group, told Dagens Industri.

According to him, about a quarter of participants ultimately landed jobs at Ikea. In contrast, others significantly increased their job opportunities by learning the local business culture and developing a professional network.

Ikea is a European multinational group that made a name for itself by designing and selling ready-to-assemble furniture, kitchen appliances and home accessories. Founded in Sweden in 1943 by the late Ingvar Kamprad, Ikea has risen to become the world's largest furniture retailer, making Kamprad the world's eighth-richest person with an estimated net worth of close to $59 billion.

According to the Swedish experience, unemployment among those born abroad reaches as high as 33.7 per cent among those with only a grade-school education. The process of entering the labour market has become increasingly drawn-out, going from two-three years in the 1980s to six-nine years in the 1990s and even more today. A recent survey by Statistics Sweden indicated that only one in ten of the 163,000 immigrants Sweden received at the height of the migrant crisis is employed today.