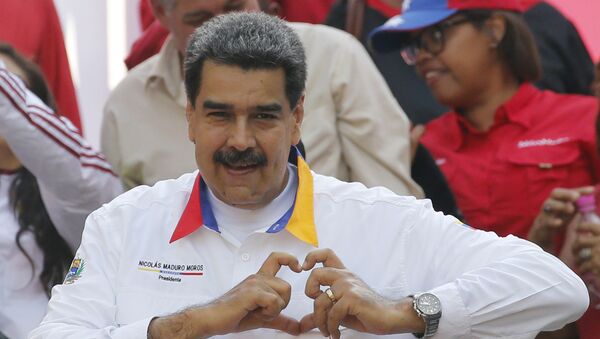 MOSCOW (Sputnik) - Negotiations between the government of Venezuelan President Nicolas Maduro and the opposition, dubbed the national peace dialogue table, are underway and aimed at ensuring the operation of the country's electoral committee and picking its new head, Carlos Rafael Faria Tortosa, the Venezuelan ambassador to Russia, said on Tuesday.

"These negotiations resumed but not with the opposition [representatives] with whom our government had negotiations in Oslo, but with another part of the opposition – the part that we believe is more balanced ... So President Maduro decided to organize other negotiations, which he calls 'the national peace dialogue table.' They have been talking for three to four months now. The main goals are, firstly, to resume the work of the electoral committee and search for its new head," the ambassador said.

"This process is ongoing. New candidates are being considered. This is very important for the opposition. If we agree on it — and we think we will — the next [step] is the 2020 elections. But they are the elections to the National Assembly only … We cannot talk about the presidential election, even though this is pursued by the right-wing, extremist opposition, which wants Maduro to run in the election again. But this will only be in 2024," the diplomat continued.

The ambassador also said that Maduro had always called for constructive dialogue with the opposition.

Russia has been impacting talks between the government of Venezuelan President Nicolas Maduro and the opposition, albeit not overly so, but any willing country could step in as a mediator, Carlos Rafael Faria Tortosa said.

"Any country can be a mediator in these talks. The fact that Norway was a mediator in the previous talks did not impede President Maduro [from holding the talks]. On the contrary, having a neutral side can regulate the decisions of the negations. We know that Russia repeatedly suggested it became a mediator in these negotiations. And even if we do not see it directly, this works. Russia is impacting it in this way at different moments," the ambassador pointed out.

The two sides of Venezuela’s political struggle engaged in Norway-mediated talks earlier this year, but they ultimately collapsed in September. The ambassador said that the opposition representatives at these talks were its most extremist members. That same month, the government and opposition agreed to set up fresh peace negotiations.

On Political Situation in Venezuela

Carlos Rafael Faria Tortosa, the Venezuelan ambassador to Russia, said on Tuesday he believed that if elections to the country's parliament were held in the near future, forces loyal to President Nicolas Maduro would win.

"We believe that if such elections take place, the forces of president Maduro will be able to win them. If [Maduro’s supporters] get the majority [of seats in] the parliament, we will be able to guarantee the process. This is one of the most important basic principles of democracy – the president and their team of ministers on one side, and the parliament on the other. If this situation is regulated, no one will be able to say that in our country we suppress the rights of the majority of the opposition, which won at the previous election. And if we have the majority, which we hope [we will receive], we think we will not have people like [opposition leader Juan] Guaido anymore," the ambassador argued.

Juan Guaido, the head of Venezuela's opposition-controlled National Assembly who proclaimed himself an interim president in a bid to oust elected President Nicolas Maduro, has shown himself to be unworthy of this position and this responsibility, Carlos Rafael Faria Tortosa said.

"They [the opposition] do not openly say it but they say it between themselves because they do not want to admit they did not pick the right guy; that the person they picked proved not to be worth this position and this responsibility. You can see what is going on in the opposition — they have corruption scandals; the money that the United States gave them as humanitarian assistance was not for assistance; it was to finance the actions of the opposition against the government. And they stole it all for themselves," the ambassador said.

On Threats of US Intervention in Venezuela

The threat of the United States' intervention in Venezuela remains real, and Caracas has proof suggesting that more attacks on its military facilities are being prepared, Carlos Rafael Faria Tortosa, the Latin American country's ambassador to Russia, told Sputnik on Tuesday.

"This lull is relative; maybe it’s due to the fact that [US] secretary of state [Mike] Pompeo and President [Donald] Trump do not talk that much about Venezuela now; they do talk about it but not as much as they did before. The threat remains," the ambassador said.

When asked if Caracas had information on whether attacks against his country were being planned, the diplomat said the authorities expected them to happen.

"We can expect them, yes. We can prove it. President [Nicolas] Maduro is constantly working together with our defence forces. He meets with the commanders in chief, studies the situation and ways to better organize the defence. And we have information that there can always be aggression, attacks from any direction," the ambassador argued.

Maduro Says US, Colombia Prepare Provocation, Mobilises Venezuelan Army
The ambassador also said that the Venezuelan opposition’s recent deadly attack on a military unit in the country’s south did not achieve everything it sought out to.

"Colombia is an unfriendly country to us. Brazil is unfriendly now too — there are our neighbours [located] in the Caribbean Sea as well. All the islands located close to [Venezuela] are former colonies and some continue to be the colonies of the Netherlands, of the United Kingdom. So things are not easy for our country now. But we can say that by the end of this year, there are more positive than negative things," the diplomat added.

Last January, Guaido proclaimed himself an interim president in a bid to dispute the re-election of Maduro following months of protests. The United States and its allies supported the opposition leader, while the elected president was backed by Russia and China, among other states. Maduro, who has managed to retain power, has accused Guaido of acting as a puppet of the US.