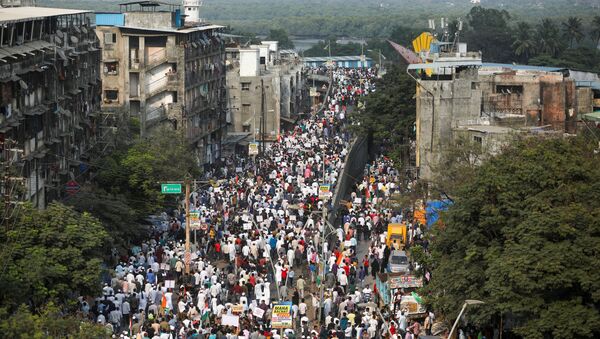 New Delhi (Sputnik): The Union Cabinet’s decision comes at a time when the country is witnessing nationwide outcry against the Citizenship Amendment Act (CAA) and a proposed National Register of Citizens (NRC). During the numerous clashes between police and protesters, about 22 people have died and thousands have sustained injuries.

The Indian Union Cabinet, chaired by Prime Minister Narendra Modi, on Tuesday approved over $1,195 million (Rs. 8,500 crore) for updating the National Population Register (NPR), besides giving a go-ahead to conducting the 2021 census.

Union Minister Prakash Javadekar announced that the Cabinet had approved the conducting of the 16th census of India in 2021 and updating the NPR.

He, however, underlined that the population census would not be done in the traditional door-to-door manner. A unique mobile application has been made where residents will fill in their information rather than in a census form.

“You don’t need to upload any document of proof, bio-metric or papers for this. It is self-declaration. The point is to record everyone who lives in India”.

Started during the former Prime Minister Manmohan Singh-led UPA government in 2010, the National Register of Citizens (NRC) is going to be updated now, Minister Javadekar said, adding that it is to provide benefits of schemes to the targeted population.

The minister said that the process has already started for the NPR and that every state has agreed to it.

In 2015, Haribhai Chaudhary, a former minister of state for home affairs, in the previous term of the Narendra Modi government, stated in parliament that the purpose of creating the NPR is to record all residents of the country, which would eventually serve as the mother of databases for creating the National Register of Citizens by verifying the citizenship status of every resident.

With the latest approval of funds for the NPR, some people have strongly reacted because the National Population Register (NPR) is being viewed as directly related to the NRC.

Its not just National Register of Citizens, National Population Register that India is building. There are 10s of these things coming up all thanks to the ill advise of Nandan Nilekani and gang. #IndiaAgainstNRC #IndiaAgainstCAA

I absolutely hate that its now coming to non cooperation with the census when we have been advocating so hard to incorporate questions to get better data on the number of persons with disabilities in India. This #NPR-NRC exercise and what its making us do hurts in many ways.

If govt representing peoples will, not b afraid of dismissal of state govts by Union govt's misusing power!
Strong sentiment of India after 1921 non cooperative movement, every1 is ready to non cooperation with draconian CAA &NRC whether state govts or people of India. https://t.co/dTt3bAOy81

​The Indian states of Punjab, West Bengal, Chhattisgarh, and others have rejected implementing the NRC in their states. Prime Minister Modi, during a public rally in New Delhi on Sunday, said his government has not even pondered upon a country-wide NRC and that opposition parties were spreading fear.

Protests over the new Citizenship Amendment Act (CAA) and proposed NRC initially began in the north-eastern region of the country, where general public is protesting, citing ethnicity issues. In other parts of the country, a lot of people and students are protesting it for allegedly being discriminatory against Muslims.

On the proposed National Register of Citizens (NRC), a big section of Muslims have voiced concerns that when the NRC is launched across India, only Muslims will have to prove their citizenship and not people of any other faith, i.e. Hindus and others.