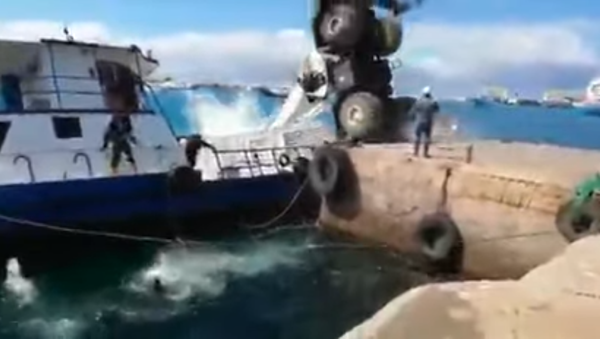 Newly surfaced cellphone footage has given insight into a Sunday mishap on Ecuador’s Galapagos Islands, which sent hundreds of gallons of diesel fuel plunging into the sea when a crane toppled onto the barge it was lowering a container onto.

The accident happened on the eastern island of San Cristobal on Sunday as a crane lowered a shipping container carrying a generator onto a boat below the quay. However, the precarious load quickly unbalances the crane, sending both of them plunging down onto the barge below.

As the momentum of the impact tips the barge on its side, its crew leap into the water seeking safety.

Fortunately only one person was injured in the mishap. However, the crash, which submerged the crane, generator and boat alike, released 600 gallons of diesel fuel into the prized turquoise waters of the Galapagos, which are also known as The Enchanted Isles.

The islands, which sit roughly 600 miles west of Ecuador, fall under the country’s administration, and Ecuadorian officials told AFP they quickly leapt into action, implementing emergency protocols to contain the environmental impact of the leak.

"The situation is under control, and a series of actions have been deployed to mitigate the possible effects," the presidential communications office said in a statement to AFP, noting they had “controlled” the spill.

The islands have some of the most fragile ecosystems on the planet. According to the Galapagos Conservancy, a US nonprofit dedicated to preserving the islands and their many unique species, the archipelago is home to “to some of the highest levels of endemism (species found nowhere else on earth) anywhere on the planet,” including giant tortoises, swimming iguanas, and a wide variety of seabirds.

Studies of the islands’ wildlife by the British biologist Charles Darwin, who visited them in 1835 and took detailed notes, helped him to understand the relationship between inherited traits and survival necessities, leading to his theory of evolution.

Widespread outrage over a potential plan for the Galapagos to house a US military base this past summer led to Ecuadorian President Lenin Moreno to declare “there are not, nor there will be foreign military bases in the country,” adding that the country “zealously preserve the Galapagos Islands.”

The generator was destined for Isabela Island, the chain’s largest and which is presently facing energy rationing. A $13 million project to build a hybrid solar-plant oil power generator was completed last month, part of an effort to minimize the transporting of fossil fuels to the Galapagos.

AFP noted the barge that tipped over on Sunday had previously sunk in February 2018, also due to a weight imbalance.