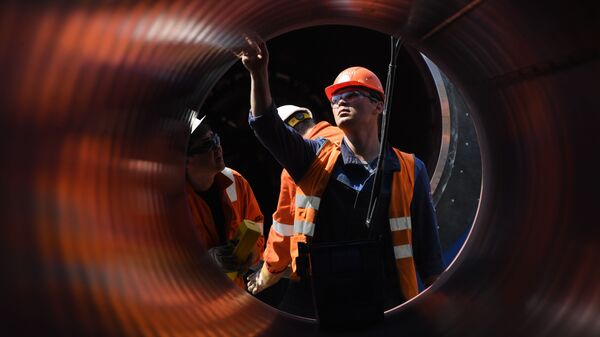 MOSCOW (Sputnik) - Dutch Foreign Minister Stef Blok criticized in an interview with the Dutch Telegraaf newspaper that was released on Monday a scenario in which a foreign government, including the United States, could tell the Netherlands where to acquire energy resources.

"The Netherlands should not depend on one country for its energy supplies. The United States is also happy to supply LNG [liquefied natural gas]. There is a large LNG terminal in Rotterdam. [The supplies] are welcome but some other country cannot tell us where to get our energy from", Blok told the newspaper when asked to comment on Washington’s stance on Nord Stream-2.

Speaking about Russia, Blok said sanctions against the country were necessary but that he wanted his country to have a normal relationship with Moscow.

Blok's comments come in the wake of US President Donald Trump signing his country's defence budget for 2020 last week, which include, among other things, sanctions targeting the Nord Stream-2 and TurkStream pipelines.

After Trump signed the defence budget, Moscow said it would carry on with all its economic projects, including the pipelines, regardless of any sanctions.

Germany's Uniper Sure Nord Stream 2 Pipeline to Be Completed Soon Despite Sanctions
Meanwhile, Allseas Group S.A., a Swiss-based contractor for Nord Stream-2, has stopped all activities related to the project. Germany’s Uniper, a financial partner of the Nord Stream-2, has stated it believes that the pipeline's construction will be completed quickly despite the sanctions. Moreover, the German Federal Maritime and Hydrographic Agency (BSH) announced on Monday that it had authorized construction for Nord Stream-2 during the winter months.

Still, Ulrike Demme, the deputy spokeswoman of the German government, said Berlin would decide on how to react to the US sanctions against Nord Stream-2 at a later time.