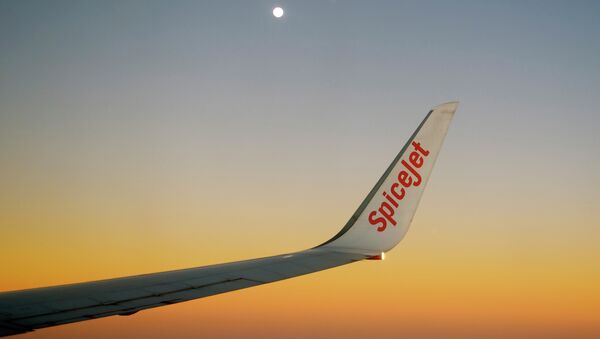 CC BY 2.0 / Arup Malakar /
Subscribe
Indian MP Pragya Singh Thakur of Modi’s ruling BJP filed a complaint against SpiceJet on Sunday because the low-cost carrier refused to accommodate her in the seat she claims she had pre-booked for a Delhi-Bhopal flight.

The ruling Bharatiya Janata Party (BJP) may have the most seats in India's parliament, but aboard the nation's low-cost carrier SpiceJet, things are a little more up in the air: a video of Indian politician Pragya Singh Thakur being confronted by SpiceJet passengers over a seating mix-up during a Delhi-Bhopal flight has gone viral on social media.

On Sunday, a SpiceJet flight was delayed 45 minutes because of a BJP MP who was asked to move to a non-emergency seat after she boarded in a wheelchair without having notified the carrier about her condition.

In the video, people can be seen reminding Thakur that she was people’s representative.

She says: "Show me your rulebook, if it doesn’t suit me, I will leave,” to which a passenger says, “you are the people's representative, your job is not to trouble us. You should come by next flight.”

Passengers on Spicejet flight tell BJP MP Pragya Thakur not to cause trouble and not hold the plane at Ransom. pic.twitter.com/4VAVqRRyDt

The row escalated when Thakur said: “There must be a reason that I am also going in this flight even though it doesn't have a first class facility.” The passenger retorted, saying first class was not her right; Thakur reiterated that first class was her right.

However, at the behest of fellow passengers, who were becoming irritable due to the delayed flight, she changed her seat.

Thakur later lodged a complaint with the director of the Raja Bhoj Airport in Bhopal, the capital of Madhya Pradesh.

A SpiceJet spokesperson said in a statement, “SpiceJet had the privilege to have Honourable Smt. Pragya Thakur on board SpiceJet flight SG 2498 (Delhi-Bhopal) on December 21. She had pre-booked seat 1A and had come to the airport in her own wheelchair. The Delhi-Bhopal flight is operated by a Bombardier Q400 aircraft (78 seater). On this aircraft, the first row is the emergency row seat and is not allocated to passengers (in) wheelchairs.”

The 49-year-old MP had courted controversy on several occasions in the recent past, including when she called the Father of the Nation Mahatma Gandhi’s assassin a patriot in Parliament. Her remarks led to nationwide outrage, resulting in her removal from parliamentary panels.